Turn on suggestions
Auto-suggest helps you quickly narrow down your search results by suggesting possible matches as you type.
Showing results for
Search instead for
Did you mean:
Options
phdadminvm
Contributor

This virtual server is an AD DC and running a legacy ERP system that we need to move, the server is fully patched and stable in its current environment.

Screen shot below of the bsod.  The server event logs give no real clues and the VMware conversion logs pretty much the same. 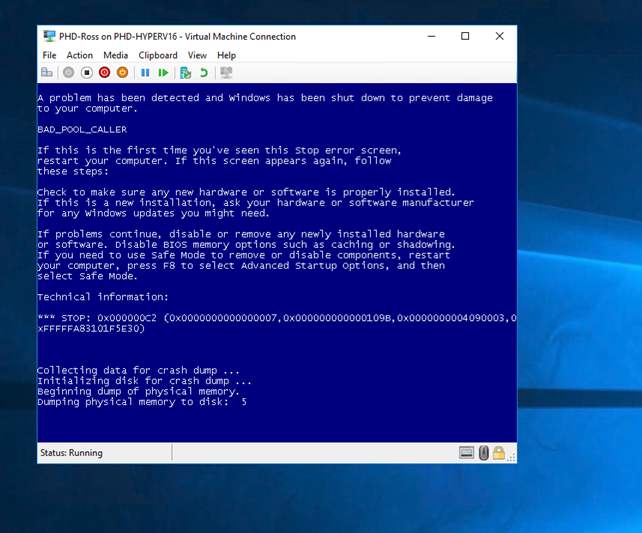 I am not sure I understand what exactly is going on. Usually BSODs appear after the conversion has finished successfully but the destination VM won't boot. Is that the case?
OTOH you mention 84 and 90%. Does it mean the conversion has failed at that percentage? Is so, download the log bundle and look at the agent log (I suppose this source is remote powered on machine; if not - the worker log). If you can afford, upload the logs for examination.

yes its an odd one.  like you said bsod after the conversion would be what you would expect.

I've carried out the conversion  VtoV  and both times the Virtual on the HyperV  bluescreened at 90% the first time and 84% the second time.

I've had a look through the  windows virtual & VMware conversion logs and nothing obvious jumped out at me but then I've a novice at VMware at this point.

I'll get my hands on the logs and upload as I'm not onsite currently.

This is really weird, I have never heard of such an issue before. From Converter PoV this is P2V (It treats powered on machines as if physical. The fact that they are Hyper-V VMs shouldn't make a difference). In this case Windows event viewer might give more interesting information. Converter's agent log might still be interesting, but it might as well end abruptly.

An interesting question is whether these were incremental conversions. There are differences between incremental and one shot.In the first case a change tracking driver runs on the source; also VSS snapshots are performed at different times. It may be an interesting experiment to try the other way and see what happens.

apologies for the delay in getting back. logs attached.

I ran the VMware converter from the HyperV server to convert the same VM hosted and bsod at 94% .

previously it was run within the VM.

VM convert server 3 and converter gui 6 were created on the HyperV box , the rest were the logs on the virtual itself from previous conversion attempts.

Windows logs show very little except for a  alerting me to a dirty shutdown.