Register / Sign In Help
X
Turn on suggestions
Auto-suggest helps you quickly narrow down your search results by suggesting possible matches as you type.
Showing results for
Search instead for
Did you mean:
Options

And is the App Volumes agent supported on Windows Server 2016 (RDSH)?

In the release notes I only see Windows server 2012 R2 as latest supported version.

I was just hunting for this same information. I spun up a desktop-mode Server 2016 linked clone pool and captured a few appstacks with the base image, but attempting to attach them to the linked clones results in errors within the AppVolumes Manager. The AVM does not seem to recognize the OS at all, so I am assuming that it is not yet supported. Interestingly though, the AV Agent allowed me to install it on the 2016 instance with no complaints and the machine even shows up in AVM as an 'enabled' managed computer.

Unfortunate, because Horizon 7 and UEM both support Server 2016 without issues. AppVolumes has Windows 10 support already, so I am sure that it would not be difficult for VMware to add support for Server 2016 in AppVolumes as well.

For reference, the error I see in AVM when it tries to attach the appstack is this:

I hope the next release will support it. Should be out soon.

I've been running app volumes on windows 2016 RDSH for months now and it has been working great although its not supported. I added a line in the operation_systems database table to add support for 2016.

Interesting. Will try this, until it is fully supported.

Thanks for the info.

Thank you so much for posting this! I did not even think to check the database tables. I just tried this and it worked like a charm; attached an appstack to my 2016-based linked clone without an issue.

Go here for what OS versions are supported with our product versions. 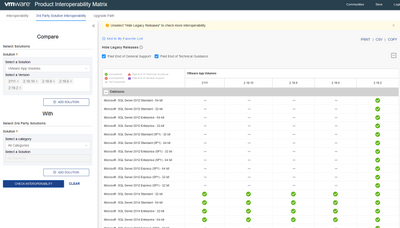 “Set your Intention in the direction of your destiny and not the distraction of this moment.”
@StevenFurtick
VMware Docs | VMware EUC BLOG | VMware EUC Community | VMware Support |