Anyone knows if we can log action name programatically just like a workflow name can be done, something like Workflow.action.name?  This helps to identify from which action the failure occurred.

As Jörg already said, there is no such build-in function. However, you can use the default Rhino engine javascript capabilities to achieve what you're trying to do. Use this:

I dont think that's possible, unfortunately. You have to add the action name manually in the log lines.

What vRO version do you use? In newer versions the Action name is automatically added to all the log messages from the action AFAIK.

Got nothing to test but if I remember the error handling behaviour correctly then you should be provided with the action name if you use throw rather then System.error.

should result in a exception that contains the name of the element where the exception was thrown at.

/Edit: yes, the error source will be logged (see screenshot). However: this was vRO 7.0 - so, as Jörg said, you might need to upgrade if you want that feature. Got no vRO 6.x to verify the behaviour there.

Not sure if it is applicable for your use case, but you can set action name (or other useful info) to so called 'business status' on the action (and other types of) elements in the workflow schema editor. At runtime, you can log the value of this business status field with code like the following:

which will print the business status property value of the currently executed element.

This will let me troubleshoot easily.

As Jörg already said, there is no such build-in function. However, you can use the default Rhino engine javascript capabilities to achieve what you're trying to do. Use this:

Thanks rszymczak!  It worked.  Can you explain "it may stop working if the RHINO implementation changes" better? Is it going to be deprecated in vRO in later versions?  Going an extra step, how to log all the inputs names and their values programatically.  Something like, thinking the inputs are in an array, just print their name and value.

Then we got Rhino, which has it's own JS engine that ->should<- be compliant to the standard. The callee object should return the function that is currently beeing executed. While it's a function we should be able to access all the common properties a function object has: function expression - JavaScript | MDN‌. One of them is the property name, which should return (just) the function name. However: in the current vRO implementation it's returning the String "Module"+FUNCTIONNAME. So when you create a action vRO is internally prefixing the action with the String "Module". This is compleatly hidden to you in the vRO UI. But once we go down to the Rhino layer and use JS functions which - btw is probably not officially supported by VMware - you see the prefix. So: the example I provided will remove that substring for you so you see the function (aka action) name you would see in vRO. There are a couple of things that can go wrong here:

- VMware may decide to disallow access to the base JS functions and restrict them in future releases, this will render access to the method broken.

- The prefix may change or be compleatly removed. The example I provided expects minimum of 6 chars ("Module"). Best case: you action name will be cut. Worst case, In case your action name would be less then 6 chars, you'll probably get an exception thrown.

- VMware my decide to dump Rhino and use something else (unlikely)

- JS standard may decide to dump the callee object (unlikely)

In any case, the example I provided would no longer function. Thus: before upgrading to any newer version of vRO you'll have to test if the call still works. VMware most likely will not inform you of any changes "under the hood" where you're not supposed to be working. 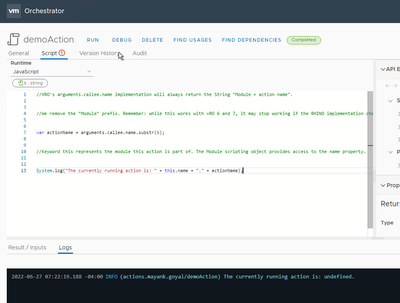