I'm seeing variation in all 3 environments on many of the plugin versions.  I would expect them all to be exactly the same.  For example:

These were all built at the same time but one difference is the migration from 7.5 to 7.6 in the lab environment the vRA/vRO hotfixes were not applied it was all GA.  For the test migration vRA+vRO plugins were applied prior to the migration being run.  I did not record the plugin levels prior to running the migration but I'm nearly positive I had confirmed everything was at the same level so I'm wondering if the migration "fixed" something?  Unfortunately I would not be able to confirm without reverting to a snapshot which I'm not keen to do at the moment as I've got everything working and would hate for a slip to cause me a bunch of grief if this is easily fixable... like I can just pull the plugins from test and install them in the other environments and call it a day.

In Orchestrator Control Center you can download and upload your plugins:  https://vra7.corp.local:8283/vco-controlcenter/config/#/control-app/plugin-manage 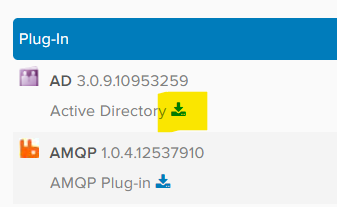 Thanks for your response.  As I said in my original post I'm aware I can simply update them this way but I want to get at the root of why, during the patching, I've resulted in this strange mix of versions.  I'll open case with VMware and see where support goes with this then I'll update this thread.