VRAC 7.0 installation fails at Verify that all services are started..

I am running through an issue while doing a brand new installation of VRAC 7.0. The same error below from https://vracFQDN/vcac/services/api/status is listed on the catalina.out log. Any help would be appreciated.

I suffered the same annoying issue.

Can I check, are you trying to build this in an enterprise or in your home lab? I ask as I was trying this in my home lab where resources are scarse so my vRA appliance only had 2 x vCPUs and 12GB RAM, so the action was initially timing out I think.

2nd time around I increased the ram for both my vRA Appliance and the iaas server, the first time I ran through everything it timed out again, so I tried to do some digging, I didn't get the same error as you from Catalina, but I did a manual check of the services from a putty session to the appliance, which also took a lot longer than I would have expected it to take.

I noticed the the likewise service manager had failed (lwsmd) and there were a number of failed attempts by the system to start this service, which I guess was the reason for the verify services task was timing out. Strangely though after performing the manual services --status-all check the verify task ran through ok?

First two steps in installation are related to configuration of appliance. After "Configure Postgres" step all vRA services are starting, but in some cases not all services managed to started for the default time of the healthceck which is 30 min. Healthcheck verifies if all services are up and running. If some service is not up and running the healthcheck fails and this behavior repeats until maximum number of retries is reach. This number of retries as well as time between every healtcheck retry could be configured in /etc/vcac/vcac-config.properties.
However we will try to add a check for vRA resources which may be one of the reasons for the described failure. It seems that the same issue was hit in https://vmware-com.socialcast.com/messages/28824096.

Not everyone will have access to our Socialcast instance

Suffice to say that this has been encountered internally and we're looking at a fix.

been experiencing this for days! any luck of getting answers/solution?

Another cause for this is if the IP's assigned to the vRA VA exceed the column varchar length causing vRO initialization to fail (can happen with multiple IPv6 entries).  You have this issue if the following apply:

To work around this (in the case of DHCP):

These below lines for disabling IPV6 already exists in sysctl.conf file vRA 7.2.0

Can you someone please share a workaround for this issue?

!I took the below /etc/hosts file on the vRA appliance

After doing this and restarting from my snapshot it passes on checking services and continues the next steps.

If the installation fails at Verify that all services are started step, it means some service is not up and running the health check fails and this behavior repeats until the maximum number of retries is reached. The number of retries, as well as the time between every health check retry, can be changed. 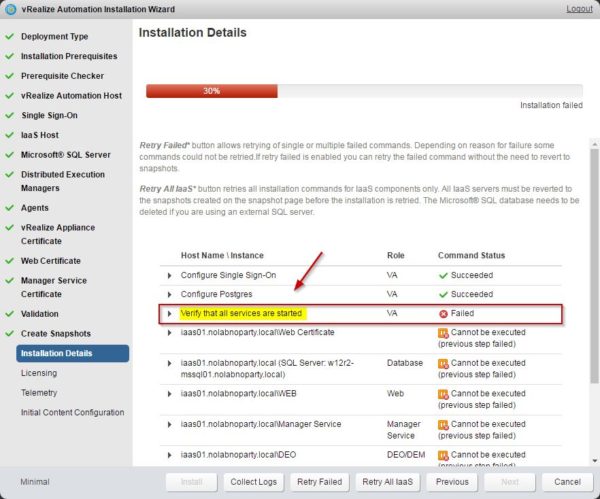 To change the number of retries and the time between every health check retry, from the VA console, edit the /etc/vcac/vcac-config.properties file.

The default values could be the reason of the failure and should be changed.

Set a bigger value and save the file. Go back to the vRA web console and click Install to proceed with the installation again.

When the installation has been completed successfully.

If your vRA install is failing at that step (which is only the second step out of many), then editing that configuration file is not the solution. Instead, you have a problem with either the inputs you're supplying in the wizard, or other environmental issues pertaining to the cafe appliance or shared infrastructure services. These problems need to be identified and fixed before editing any config files.