Hi all, first time ive see this but i am showing VMWare Inc. Updates being pushed through Windows Update Services as below:

Only seems to be on Server 2016 and seems consistant with things ive seen online relating to VMWare Tools.

the installed version of VMWare Toold is 10.1.0.

Cannot find any more information online regarding these updates, any suggestions or advice on where else i can look?

I cannot believe for 1 minute VMWare would push out an update with no release notes/change log.

Thanks i had seen this but its for something completely different.

The versions are all different etc. i had suspected it was a VMXNET3 driver based on this content but need some confirmation or at least some reference from someone at VMWare as to what it is im actually installing!

are you using SCCM in your environment.

Yes also seen this but again its not really compariative to my issue other than the version numbers... literally can't find any information on this at all.

We aren't using SCCM, this has come directly from Windows Update Services.

pvscsi has been coming down through WSUS for some time. Looks like there's now more.

My issue is similar but different version but and same date

The annoying thing with my environment is that this is the only item in the install list.

It fails and only gives me the single button to Retry which will come back to the same error as seen above.

This update doesn't exist in my WSUS. And it does not give me the option to check for new updates.

This has been driving me nuts and I haven't been able to find a way around it yet. Any further help guys? 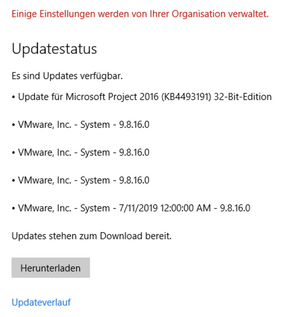 There are two VMware Devices with old driver versions, which is not correct (remember the VMware Tools 11.2.5).

Are your VM's using the latest virtual hardware version?

We attempted to explain to VMware (ahhh..."support"), falling on what has become typically (over the past 5 or so years) Dell/EMC deaf ears, that, one, VMware in the past always provided updates through its desktop applications (VMware Fusion Pro, Fusion, Workstation, etc), two, Fusion, etc. are VMware products and therefore the responsibility of VMware and not Microsoft, three, Microsoft has proven to be unreliable for stable updates (one issue resulting in major errors for servers, enterprise desktops, etc nationally and documented by numerous IT end-users support).

Not of any help to this annoying issue, nonetheless, the writing was on the wall when, one, EMC acquired VMware (acerbically clashing cultures) and, two, Dell acquired EMC including VMware (even worse corporate culture clashes) evidenced by the common consensus: The entire development team behind VMware Workstation and Fusion was disbanded and all US developers were immediately fired, including and followed by numerous C-Level turnovers (CEO changes averaging one every  3 years, numerous) within a short span of time.

Greene/Rosenblum's once great startup child is now questionable for future-proof desktops and servers (we simply have ignored these VMware (emph: VMare, VMware/Dell 9.8.16.0 update notices and have instructed our customers to do the same). Conversely, once in a great while, rarely, we have been able to communicate with an outstanding, knowledgeable, East-Indian based senior tech support team...just not with this annoying, chronic update. VMware "support" we've communicated with are unwilling to accept responsibility for what SHOULD be their product, their support, their update insisting on now deferring to Microsoft (again, for a VMware product! Don't bother contacting us VMware in the slight chance someone from VMware catches these comments; nothing VMware will say will convince us this is a Microsoft matter).

Hi @wila: thank you for questioning - i've edited the reply above with ESXi 6.7 Update 2 and later (VM version 15) and it's in BIOS-Mode, not UEFI.

@DRailroad thank you for this background-information. It's allways the same problem in IT by blaming the other company and vice versa. Running a VWware host alone without VMs is easy, running a Windows Server alone baremetal is easy but in the end of the day they have to work together as a Windows Server Guest on a VMware host. That's the reason why i try to get rid of this problem here just by analyzing the circumstances.

I have exactly the same issue on one of our 2016 server VM : 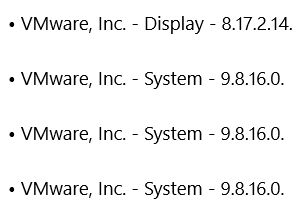 Installed more than 50 times since February 4th, 2021. Sometime with error but most of times with success.