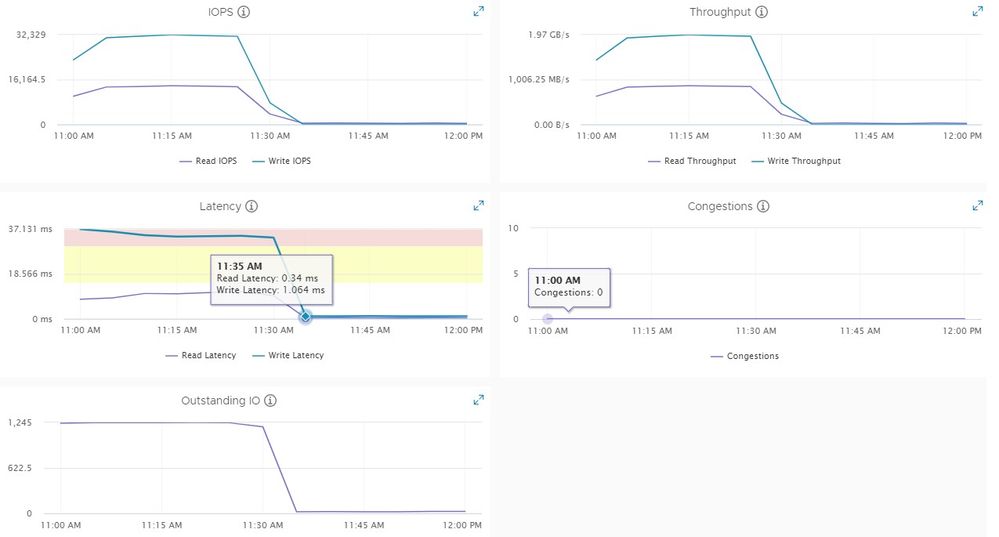 Hello, did you solve this problem ? We have similar issue with All-Flash SAS on 10Gbit network.

Not really, upgrading to 7.0.2 helped. In the end Dell arranged for a VMware SME to engage and he called out some minor tweaks but ultimately said it's correctly configured and working as expected. Given the all NVMe and 4x 25GbE networking I still think it's not running A1.

Same here I'm trying 4x10Gbit LACP but still big latency, sometimes congestion. We consider to buy 25Gbit switch, but I don't know if it will helps.

Do you have still this issue or is it solved?

We reduced write IOPS to vSAN and now it's fine, but we are waiting for 25Gbit NIC to switch from 10G to 25G on vSAN, so I hope it'll help. Then I can try previous setup and can lat you know.

What kind of workload are you running? What GuestOS?

Or do you just HCIBench the environment?

Ok interesting. Have you set the PVSCSI to the recommended values mentioned here https://kb.vmware.com/s/article/2053145. If so set it back and test again with SQL.

What kind of workload profile have you tested with HCIBench?

Thanks, yes VMware tried all these. I have moved away from this project now. Hope you get yours sorted.

Ah ok no worries. Just wanted to see if you had the same issues as I had. I sorted it out, just wanted to help.

WHat was your issue ?

We had SPLUNK running on Linux and per default Linux running max sector at 512K. That means an IO can have as much as 512K block size and SPLUNK was writing with this size. vSAN will take this and split it into 64K blocks. In addition, we had max PVSCSI settings. After changing max sector to 64K and cmd_per_lun=32 and ring_pages to 8 we were going down from 77ms to 3ms on the VM layer and everything worked flawlessly.

We had major write latency with VSAN.  After logging a call with VMware they highlighted that it is a bug and been fixed in 7.0U3f:

Thank you sharing the requested details.

I have reviewed the logs and below are my findings.
Issue:
High write latency on a disk group.

We could see that one of the disk group on host '<hostname>' was reporting high Log congestion bandwidth, causing latency on the disk group and could impact multiple VMs having components placed on this disk group..

[Image is no longer available]

We could see the host '<hostname>' was taken into maintenance mode on 18th July at 11:16 UTC which resolved the issue.

We have know issue with the current ESXi build when 'unmapFairness' and 'GuestUnmap' is enabled.
Please find the KB# below:
https://kb.vmware.com/s/article/88832?lang=en_us

Resolution
Update to vSAN/ESXi 7.0 U3f which contains the code fix for this issue.