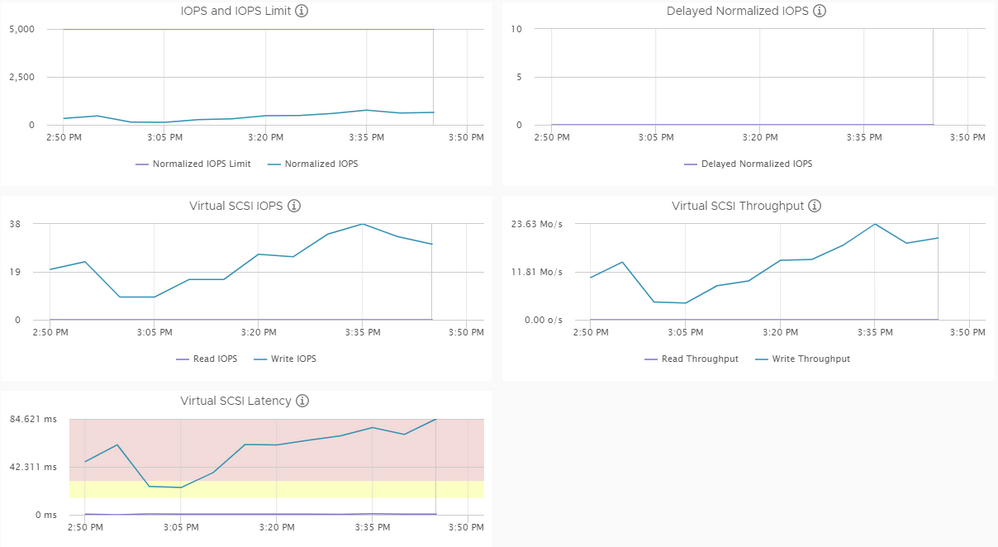 I too am finding some unexpectedly "average" performance on a 5-node all-flash vSAN cluster I'm working on for a client (vCenter 6.7), vSAN on-disk format version = 10.

The environment private cloud so I don't have full visibility of the back end network, however I do see that the hardware specs of the host servers are very good and modern.

I use a combination of tools to assess performance. HCIbench for cluster level performance, but for 'real-word' performance test I use simple SSD read/write utilities on a Windows VM guest. I won't go into the exact numbers, but basically the VM guest performance on vSAN performs worse than it does on VMware workstation, installed on my laptop with a single consumer grade SSD. The performance is slightly better than my testing lab server, which has 8x Samsung Evo 850's in RAID10 on an old LSI MegaRAID 9261-8i controller.

I have a case open with VMware and the private cloud vendor, so we are trying to work out what is causing the poor write performance and high latency spikes.

For me it was because on VSAN nics I was not using lacp and the 2 ports was configured as active/active and not active/passive and Aruba switch was awful as intraswitch performance.

Same here, and I tell you why : benchmark use small to average io size : good perfs on vsan.

When you use file copy or any real world use case, like database dump, etc, you may get poor performances (by poor I mean not what you would expect from SSDs). I write "may" because it depends on the OS, filesystem etc, but in the end, if your io size are > 1MB, performances are poor.

Everyone here will just say to you, "file copy is not a real benchmark" end of discussion.

But as you, I think it may not be a benchmark, but it's real world use case, and performances are not ok.

And I can't find any bottleneck in the chain, neither vmware support could, so I gave up on my support request.

Overall, servers works just fine because 90% of iops are small io. Just don't be surprised that when you do a filecopy you get poor performances, it's by design.

We had an escalation ticket open about this for months and support eventually confirmed that with vSAN 6.7 there are low throughput limits per vmdk.  They actually suggested we break up all vmdk's to no more than 50 GB each to get around these limits, which obviously is ridiculous.

If you have tickets open, ask support about the vmdk throughput limit as I don't recall the specifics.

This is by design, as any shared storage is designed to get accessed by multiple hosts (different OS, different applications, different IO profiles, multiple threads).

So IF your used case requires high single thread IO performance it would require tuning on the VM side.

This should increase performance of those single thread applications.

Just a side note.

Windows explorer file copy tasks uses different IO Sizes for read and writes, but both are larger than 64KB per IO.

vSAN is optimized for 64kb IOs.

vSAN has to split larger IOs into smaller chuncks, and such activity would increase the latency of the IO.

And when using only a single/few vmdks with default SPBM stripe setting of 1 you might end working with a single cache device instead of spreading the load on multiple cache devices.

But I would be really interested in a reference/kb article regarding vmdk throughput limit.

What you are writing is partialy right. Have you ever tested file copy on low end array ?

I get more throughput using a 60 magnetic disks in sequential read / write than in a full flash vsan cluster.

But it's as you said, the vsan is here to serve many "customers" not only my benchmark, whereas the low end array will go all in for me.

I think the main problem here is to accept the fact that, in a vsan cluster, you may get less performances on one job with hundred of flash disks working than you would get on a single direct attachment flash disk (or even local raid 5 raid card with 3 flash disks). It's disappointing but it's by design.

And it's good to know it - one VM can't compromise the whole vsan storage cluster.

What's the most frustrating I think is no bottleneck is seen in the chain.

Check cache disks : latency ok and not filled up

Check vsan : no bottleneck in graphs

Also some graphs doesn't make sense to me, and that is frustrating too.

But I believe the global vsan graphs are not accurate : it's related to our discussion. The vsan graphs show an average performance of VMs doing IOps.

And if at a specific point of time, only one VM is doing high IOPS : this VM will make the graphs "averages" go crazy.

Look at this (I removed writes as they are not spiking and it's easier to read and get my point) : 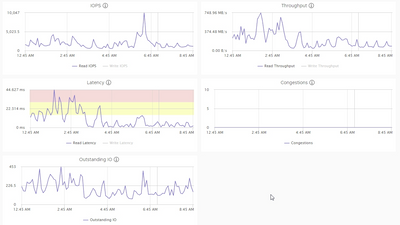 We see huge spikes in read latency while iops don't raise, but throughput do raise. So it's the sign of increasing IO size incoming on the vsan.

You can see later an iops read spike while latency don't increase this much.

At first I thought there was a problem of latency in my vsan, but in fact there is no problem : just one VM doing a lot of stuff and result in "false average" latency graph.

I believe that, if during this backup time, I had many VMs doing "normal" iops (at least 3 or 4 more than the backup job), my graphs would show "normal" latency, not such spikes.

I don't know how this could be fixed.