why my windows server 2016 inside vmware workstation 16.2.4 can not connect to the internet

I have the following:-

but my windows server 2016 is not connected to any connection, even when i connected the host to a wireless connection and wired connection, but the guest keep showing this :-

I also tried changing the network settings to those 3 options without any luck:- 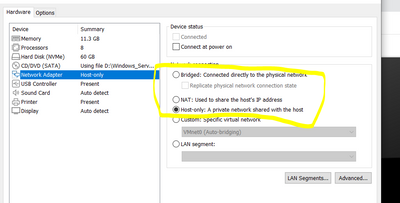 Well yes, don’t use Host-only if you wish to connect the VM to the wider network, use either NAT or Bridged. In addition, your second screen capture appears to be conflating two different windows, one of which obscures the other, so if you are using a VPN, then for the time being turn it off.  Do any of your other VM's have network issues ?

Prerequisites:
- The Win 10 Host has access to both the local network and the Internet
- All VPN's are disabled
- Set the Win Svr 2016 VM Hardware - Network Adapter to NAT
- The Win Svr 2016 network is configured to use DHCP