I have vmware pro workstation v15 and it's not detecting gpu. I want to be using my gpu on both my physical machine and the vm. 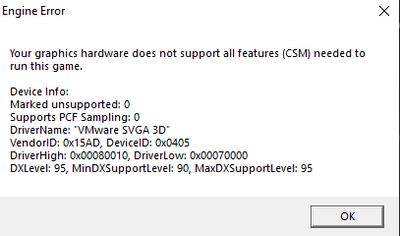 VMware Workstation (or VMware Player) cannot pass through the graphical card directly to your VM.
Note that even if you could do this that only ONE machine could use it (either your host OR your VM)

What you can do is to:

- make sure that your VM is using the latest virtual hardware
- enable 3D on the display
- install the latest vmware tools.

If it still doesn't work then start by providing a vmware.log file and give us more details, such as your hardware and what game you are trying to run.

Thanks for your reply.

Could I make it so when I have vmware executed it uses my gpu, but if I close it my pc will?

Or can I get a "virtual gpu", if that even exists, so it could run the game because it requires a gpu and as it's not detecting my pc one...

blair34
Contributor
Spoiler
3d are enabled. And where do I check if I'm using the latest vmware tools. Should I reinstall them?

If you give me screenshots or details, please explain to me what it is that I am seeing. If I have to guess... I cannot help.

So, this is the minimum requirements for the game to run.

OK, please provide the vmware.log file(s) from the VM (you can find these files in the folder of the virtual machine).
You might have to zip them up before you can attach these files due to the forum software we nowadays use.

~My issue now is "where can I download the vsphere physical client?"

Can you help with that? Thanks.

??? The vSphere physical client is deprecated and is not for using with VMware Workstation but with vSphere.

Your question makes no sense to me at all considering that you previously talked about gaming.. (vSphere client won't help for that)

It is somewhere under download (I have to google it too)

Hello,
Thanks for your reply.

I'm looking to gpu passthrough and was searching around and seemed that vsphere would be able to help. Now, I would prefer to have the client instead of it on the browser. Also have some issues with ip whitelisting, is it possible? So I can allow a different pc to access the vsphere server.

Recent versions of vSphere do not support the thick Client anymore, it was deprecated years ago and I would not even consider to go down that path. IIRC then vSphere 4.x was the last version to work with the thick client. That was over 10 years ago.

vSphere is a completely different animal and needs to be installed on the metal instead of on top of another OS such as Windows. You'll need another machine to connect to your vSphere installation, that can be either via the browser (the default), VMware Workstation or Fusion, and also vmrc.

Even in this scenario you would need to have 2 graphics adapters (one for vSphere, one for the VM) in order to use it. Note also that vSphere only allows pass-through with supported graphics adapters (which you will not have as those are way more expensive than a consumer GPU)

If you really want to do "gaming in a VM with pass through GPU" then I personally would not look at VMware as my first thing to try. Yes it can be made to work, no it won't be easy. Probably better to run Linux and use KVM or one of its derivatives such as ProxMox.

How can i achive passthrough, thnx in advance.

Did you actually read the replies to this thread?

You cannot as it is not a feature of VMware Workstation.

GPU Passthrough with Windows as host OS cannot be achieved with any VMware product.

Your options are:
- VMware vSphere, so no host OS and needing hacks to get a consumer GPU to work
- Windows Server 2016/2019 as host OS and Hyper-V
- Run a Linux host and use KVM or ProxMox

Alright I will go with VMware vSphere thnx :).