The issue is still there on 16.2.2 connecting to Vsphere VM's.

Only Edit->Paste works for me. CTRL-V does NOT work. Nor can I copy anything INTO the clipboard using either Edit->Copy or CTRL+C.

Still impatiently waiting for 16.2.2 on Linux.

5 months later, this bug has not been fixed yet. I'm really disappointed with VMware. I desperately hope the Linux version gets a fix soon.

This should be completely fixed in WS 16.2.3 release.

I have Windows10 64bit as HOST. Copy/paste between host and guest and full-screen for Ubuntu 20.0.4 server guest with VMWare 16.2.3 Player does not work. What is interested for me, all these are working fine for my Ubuntu Desktop guest (so not a server), also works for Windows7 guest.

Does this mean, VMWare Player has "issue" only with Ubuntu server? 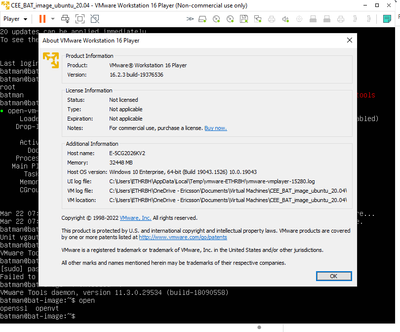 Interestingly, from WS 16.2.3 until yesterday, [Ctrl+V] worked in guest.

The, yesterday morning, only Edit|Paste worked.  Rebooted host, no change. Because no update to WS had occurred, but updates to Ubuntu happen almost daily, I surmise that for my instance the issue may be on the Ubuntu host side.

I still have the issue.

I just receive my new laptop and I installed:

and I copied my old virtual machine Windows 10 on the new system.

The copy & paste feature doesn't work  correctly. It works well from guest to host using Ctrl+V, but not vice-versa. I have to use Edit->Paste button.

Also the Drag&Drop is not working correctly. It works well moving files from Guest to Host, but I can't move files from Host to Guest.

Something to add to my previous message.

I'm trying to avoid the downgrade to previous version and I'm trying to use the Edit->Paste button to Copy&Paste text from the host to the Guest.

I noticed some unpleasant behaviors:

is it the same for you? Do you know if they plan to fix it?

I highly recommend downgrading to 16.1.2. Even on Windows pasting still does not work if you are connecting to a vCenter Server.

The only thing open in this thread is a discussion. You can’t assume that VMware is knows about this issue or is taking any action on anything posted here since this is a user-to-user discussion forum. It’s  not an official VMware product support vehicle, even though from time to time VMware folks will stop by and unofficially participate.

Opening a support ticket is the only way to make sure VMware is diagnosing this and working on a fix.
It is a shame that VMware does not provide a vehicle for officially reporting a problem other than the 30 day complimentary support or a paid support contract.

If you are able to use, Edit->Paste button then this issue is resolved. This was fixed in WS 16.2.3.

Considering guests have open-vm-tools, open-vm-tools-desktop installed in it and tools are running, and On host side In VM Guest Isolation settings, dnd copy paste is enabled. The behaviour will same as 16.1.2.

If that still don't work for you, I would suggest to file a ticket on open-vm-tools github page.

DnD is enabled on the Host, VMWare tools are installed on the guest.

If you can paste from host to guest, then the original  problem  which is thread is  referring to is fixed.

I would suggest to please  file  issue on open-vm-tools github page. I will ask more details there and redirect it correctly.

There are different types of Copy and Paste in VMWare.

if you can use the Menu: Edit-> Paste button then this issue is resolved.

This menu function just sends the keys from host to VM one by one by simulating pressing, not through some protocals or softwares.

You should not reply here  because your problem is about another issue like open-vm-tools or VMWare-tools, which helps copying files and other things.

Uh, sorry but from the user's perspective it is not resolved.  What's worse, is that it is intermittent.  In this case it is a venerable Windows VM presently at 21H2 on VMware Workstation 16.2.4.  Copy/Paste Host<--> Guest has been an issue off and on for DECADES.  It has been mostly better the last few years until recently.

A week ago I had an email deadline (MS Outlook) and Copy/Paste didn't work, nor did Drag/Drop.  Used Host file save, Guest file open to get it done.  Today needed to do a PowerPoint and MAGICALLY Copy/Paste was working.  For five graphics pastes that is.  Then it quit.  I didn't notice right away until I saw the last few slides all had the same image.  Drag/Drop no go to the VM desktop.  Rattled around a bit (sigh, here we go again...), then gave up and used Libre Office directly in the host just to get it done on time. An hour later I go back to the VM and it is working again with PowerPoint in the VM.

Here's the thing: I DID NOT pause/restart or reboot the VM in the mean time.  Only restarted PP (again!).  Neither has it been rebooted since last week.  VMtools has NOT been reloaded, nor any Preference settings or compatibility level changed.  The host hasn't been rebooted.  In other words, as I'm sitting here trying to get work done, this feature COMES AND GOES.  This I've never seen before - in years past when it was gone it was gone, so I did have to reBOOT the VM or the host or both (all of the VM's!) to get it to come back.  This unit is a 2015 HP model "portable workstation" aka fat notebook, and I have noticed the problem is more likely to happen if the host was made to "sleep" while Workstation was running.  Learned not to do that - paused VM"s and killed VmW.  But, again, that isn't what was going on this last week - it and the VM were running the whole time.

So, if you would be so kind, for those of us who regularly post here -oh- every few years, could you please direct us to the proper subsection of the forum to rightly post our whining and moaning?   Thanks!

@Jon_Harmon I think you directed your comment at the wrong person, it should have been @immortalt

I went to the open-vm-tools github  page as suggested and noted that there were a number of similar issues reported, not only cut'n'paste, but also drag and drop of files, etc, and these remain outstanding. Switching over to WS Pro 16 has been a right PITA as, apart from this, they also have broken workstation sharing despite assurances that 16.X is the last major version these features would remain.

If having issues trying to copy and paste (I mean using Ctrl + V, not Edit -> Paste) from host to guest, or guest to host, check if you are using Wayland on the Linux Host / Guest. This affects many distros using Wayland.

Wayland is causing all of the issues for copy / paste of text, files, and drag and drop issues. Files over a certain size (tested over 10MB) will cause Nautilus file manager to crash directly in Wayland. Changing to X11 resolves all of these issues.

Note that you cannot drag and drop files to the Ubuntu Desktop itself, has to be to Nautilus.

Thanks for the info Tomy

Unfortunately I already am configured to use x11: