VMware Workstation does not support nested virtualization on this host.

After Windows update 2020 may build 2004, vmvare doesnt support Virtualize intel Vt-x/EPT. How fix this problem. I update vmvare to 15.5.5, But it didn`t help

While troubleshooting a different issue I wound up going down the rabbit-hole of disabling Hyper-V on a currently up-to-date Windows10Pro host. Even the Microsoft support articles for this are not complete, so I'll add what I needed to do here. Also I think VMware needs to make it more obvious when your host is running Hyper-V...

I had an issue with snapshots of running systems taking 20+minutes that I initially thought might be related to the performance degradations that come from using Hyper-V/"Host VBS Mode", so I followed the steps outlined on these two pages (the first one is not enough):

This didn't effect the slow snapshotting issue, but it did make the Linux guest performance much better in other ways. The most significant improvement is that guest audio was poppy/crackly/interrupted (to the point of being nearly unusable) prior and now it comes through perfectly clear.

(Note: I'm using an X570 motherboard with a Ryzen 5950X and have the virtualization extensions on in UEFI and VMware Workstation is configured with "Virtualize Intel VT-x/EPT or AMD-V/RVI" selected in the Processors configuration)

A hint to VMware devs - There really ought to be an obvious indicator in VMware Workstation of whether it is running with the VMware Hypervisor ("Traditional Mode") or with Hyper-V ("Host VBS Mode"). Even combing the log for HyperV only gives an obtuse clue about whether it's running. I'd prefer if the second line of the log says something to the effect of "Host is running Hyper-V, switching to Host VBS Mode. Performance and feature-set are degraded in this mode. To use the traditional mode, see: <shortlink to currently non-existent VMware support article about disabling Hyper-V on your Windows Host>".

Another hint to VMware devs:

The error message screenshotted in the original post is misleading ("VMware Workstation does not support nested virtualization on this host.").

This would be a better way of handling it...

If Hyper-V is running:

If a CPU with support for VT-x/EPT or AMD-V/RVI is detected, but the feature is disabled in BIOS/UEFI:

These could be additional checks and tips that pop up when a nested virtualization error box is triggered, along with other circumstances of limited feature sets triggered by Hyper-V being enabled or hardware virtualization being disabled.

Another thing that would be nice to see in the VMware Workstation UI...

Hardware-assisted virtualization is the biggest factor for VM performance. The closer your VM can get to hardware, the better it will perform. In general we want to be able to see what VM features are currently hardware accelerated.

A table in the VM status popup I mentioned wishing for which shows details similar to the table here would be amazing:

More generally, I think it would be in VMware's interest to have more of a focus on highlighting when, where, and how it might be able to configure your system and the software to achieve better performance.

Opaquely running in a crippled Hypervisor environment is bad for user experience. Any way you can nudge users to get the most out of their hardware and your software is a win for everyone.

Some more practical advice: In the Help page for the "VM Status..." popup I'm wishing for, make and link to a very detailed and exhaustive summary of virtualized desktop performance and security factors which runs through the advantages and compromises of the hypervisor and host hardware-assisted virtualization settings

Another practical example of something VMware can do both to improve user experience and as a marketing/sales/good-faith-credibility-to-power-users play...
Make a blog post with a title like:

"An Ode to Our VMware Workstation Power Users."

Include some blurbs in this spirit::

One can dream, right?

This document is a great example of how un-obvious performance settings are currently in VMware Workstation:
Configuring Virtual Machine Processor Settings (vmware.com)

That covers this section of the Virtual Machine Settings > Hardware > Processors page: 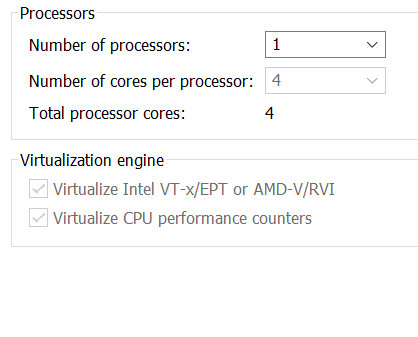 Example from a running guest.

Currently the article states this about the feature:

Instead of what's currently in the "Virtualization engine" settings box, I'd like to see this:

The Help for this page should have more detailed information about what hardware-assisted virtualization is, how to make sure it's enabled on your system if available, and why you would generally want to use it.

It's unclear anywhere I can find what IOMMU acceleration (VT-d or AMD-Vi) might get you in VMware Workstation anyway.

Will enabling it improve USB3 speeds at all? Reduce CPU overhead at all? Can I use it to passthrough a 10GbE card to a VM? How would I?

Even if the answer is "No. Use ESXi." It would be nice to HAVE an answer of any sort published.

This is the promise as pitched by VMware 13 years ago: VMware VMDirectPath and Intel VT-d explained in 3 minutes | TinkerTry IT @ Home

I can't find anything about a real world use of it in VMware Workstation currently. Is there a point to having the feature exposed at all? In ESXi/vSphere they have lots to say (pages 12, 40, 41).

We're in an era now where you can get 2.5GbE on a Raspberry Pi, and people are setting up cheap home lab clusters. It seems reasonable to expect VMware Workstation to have some PCI passthrough support. Does it?

There are many band-aid solutions to this problem, and I will add to it.  NONE of the aforementioned band-aids worked for me.

Note: Disabling the "Virtualize Intel VT-x/EPT or AMD-V/RVI" option did allow me to boot into my VMs, however I could not boot into any VMs I already had suspended with the option turned on.

Here is what I did that worked:

Yes, this will work but it will like 32 bit and not 64 bit . So VM performance will be very slow. Some of existing VM will not run sometimes.

I don't have it installed.

As I said, I was contributing to the list of band-aid fixes.  Nothing else worked for me.

disabling Virtualize Intel VT-x/EPT or AMD-V-RI and Virtualize CPU performance counters under VM Settings is what worked for me!

Even if hypervisor is off, this setting must be disabled. At least on windows 10.

@bleys that is the conflict here. If we disable the components you are listing here, then Docker will not be able to run on the host using Windows Subsystem for Linux and for that matter we would not be able to run WSL standalone either.

That is a productivity killer. Yes we will have VMware Workstation running "legit" as in it will use its own hypervisor and yes you will be able to run nested virtualization inside VMs. But loosing those two aforementioned features is not an acceptable compromise I believe may software developers are willing to make.

Hello,  Thank you very much for the information about fixing this very annoying problem.

I have tried all that I can think of and I'm still unable to resolved the problem.

do you have any other subjection.

new Windows 11 machine new installation of everything and there is no Hyper-V or any other virtualization software running on the machine.

for me i downloaded 15.5.6 version of workstation pro and it resolved this issue.

Regardless of the above (HV not enabled, `bcdedit /set hypervisorlaunchtype off` ran, system rebooted)...  systeminfo.exe still shows...

I was able to get this working by the following (make sure to read through to the bottom):

As I mentioned before, uninstalling the Ubuntu application, disabling WSL on my Win10 PC within "Turn Windows features on or off", and rebooting my computer DID NOT resolve the GNS3 VM startup issues within VMware Workstation. What I found, which was very odd, is even though ANY/ALL references to Hyper-V were NOT checked (enabled) within "Turn Windows features on or off", running the following system utility command within a terminal window ---> systeminfo.exe, showed Hyper-V was STILL running on my system due to the following output displayed:

Hyper-V Requirements: A hypervisor has been detected. Features required for Hyper-V will not be displayed

The moment I saw that, I used the following powershell command (run as admin) to disable Hyper-V in Boot Manager, and rebooted my Win10 PC:

After my Win10 PC rebooted successfully, I ran the systeminfo.exe, system utility command once again to verify Hyper-V was truly disabled. Thankfully, it was as I saw the following output displayed this time around:

I am pleased to say, once everything mentioned above was done... I started the GNS3 application, which successfully powered on the GNS3 VM in VMware Workstation Pro, and I was able to open my projects once again!

NOTE: All devices and their associated configurations within my GNS3 projects remained intact. None of my GNS3 projects were negatively impacted by this virtualization fiasco. Also, the following sites helped me identify the issue and provided the correct solution for my GNS3 VM startup problems:

After following this, I still couldnt get HyperVisor fully turned off, which prompted me to google "fully disable hypervisor" which lead me to the following link, which is what finally worked: Disable Hyper-V to run virtualization software - Windows Client | Microsoft Docs

Keep in mind I had still already gone through all the other suggested fixes.

As simple as doing this. Thanks a lot! you save me a lot of troubles!.