I've recently installed VMWare and Ubuntu on a new Windows 10 laptop and I'm finding that after a period of time the VM consistently becomes unresponsive and CPU usage spikes to 100%. If I suspend and awaken the VM it works for a period before the problem reoccurs.

How do I go about solving this?

It happened to me also and it happens around every 30 minutes.

I found out that it is something to do with the Win 10 recent updates. I will have to uninstall the update and restart my PC. Then, VMWare Workstation will works completely fine.

Hopefully, either VMWare or Microsoft able to find a fix for this.

After some time I loose contact to the VM and cannot use keyboard and mouse. Sometimes I can restore responsiveness using suspend/resume, sometimes not. But no matter what the timestamp in the ubuntu top is always updated on resume.

Sometimes I cannot even suspend but have to shutdown.

When I inspect the syslog if find lots of soft lockups for each CPU with increasing seconds. On one VM all 4 CPU's are locked and on the other only CPU 1-2-3 is locked but the result is the same - no response to keyboard and mouse.

I suspect either updates to windows host or to ubuntu vm two weeks ago either jeopardized the host-guest compatibility or the Windows-VMWare compatibility.

I noticed that the loss of responsiveness is more frequent when running Thunderbird or DBeaver inside the Ubuntu VM.

I hope this can be nailed soon - it is very annoying.

I've encountered this as well after installing a recent Microsoft update (kb5017308 on 9/13/2022). My Linux VMs suddenly get starved for cpu access, and throw messages like:

This is Workstation Pro 16.2.4 and I am running on top of hyper-v virtualization on my Win10 host, which means that vmware is using Microsoft's API to call through hyper-v. The Windows update must have broken something in that interface. It's fairly random, seems like some type of subtle timing or race condition that gets set up, blocking the Linux guests from getting cpu resource. My Windows guests (Server 2019 and Windows 10) are not affected. I suspect that if I disable hyper-v and give Workstation Pro direct access host resources this will go away. BTW, the reason I am using hyper-v virtualization on my Windows 10 host is to enable the use WSL2 with a native Linux kernel. I may need to disable hyper-v and revert to WSL1.

Definately unrelated to the VM since i get the exact same behaviour when creating a new VM (ubuntu22.04) from scratch

Problems started after some windows update.  wil try to figure out what update exactly

These are the updates that were installed on my laptop around the period i stared seeing the problem :

My problem started with exact same updates on my Lenovo as well.

Check this thread I accidentally started in the Mac forum
https://communities.vmware.com/t5/VMware-Workstation-Pro/Re-quot-Soft-lockup-CPU-stuck-quot-on-Red-H...

this seems to be independent from the linux distro used.

I can reproduce this on any EL7 EL8 ... RHEL operating system. It is just annoying.

If I had to put money on it, I'd say it was a Windows update too as nothing else changed in my environment

I implemented your suggestions and have been without the issue since.

However, I did not see the issue 18h before I did your changes, so I'm not sure that your changes did the trick.

Can you elaborate over what your changes do in detail ?

I am also seeing the issue also.

on an old Redhat 5 instance, it locks up about 5 minutes after being rebooted.  I can sign in and do some work, then it locks up.

even happens in single user mode.

Actually i am not sure what this change is doing exactly.
But i remember a lot of virtualization solutions created a dedicated user group to allow special operations. Maybe there is something documented in the user/admin guide of VMware workstation.

On a laptop I noticed that the issue appeared again when waking up from hibernate/sleep. Lid-closed non-hibernate sleepe worked.
I guess something is wrong with a special component of windows hyper-v.

Was experiencing the same slow down of Linux VMs (Ubuntu 22.04 and Linux Mint 20.3).  However, I removed recently installed Windows updates (KB5017380 and KB5017308) and did a reboot and now those Linux VMs run just fine.  I tried a lot of other things (update BIOS, update drivers, etc.) to fix this issue but once I uninstalled those two windows 10 updates the VMs started working without issue.  I'm not sure which of those updates did the trick I haven't reinstalled them yet to find out.

My system is a lenovo notebook with alderlake i7-1260p.

There is also one more courios thing. vmware tells me i can not use VT-x technologie, since my system is NOT supporting this feature?!?!

The system get stuck about 10-30 minutes after start.

Only action to recover is to power off/on the vm.

Exact same issue here, I cannot do anything with my Ubuntu 20 VM!

Hopefully there's some kind of workaround.

simmessa
Contributor
Spoiler
Uh, and here's a screenshot from an SSH session if you like... btw the SSH session is dropping every 10 minutes 😞 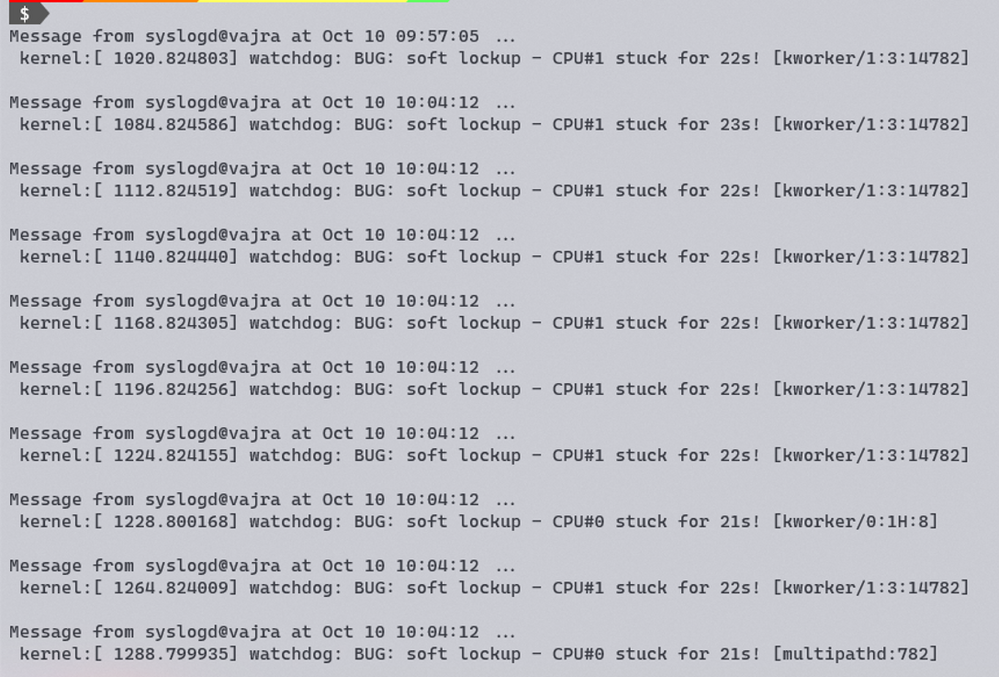 So how did you do that, @BW3? - on my Win10 those wupdates (Servicing Stack updates) are un-uninstallable (marked permanent in the manifest).