I've run into somewhat of an annoying issue where the Code Outlining function in Visual Studio does not respond properly to mouse position/clicks when using VMWare Workstation Pro 16.2.2 on an Ubuntu 18.04 Host.

The image below shows the mouse cursor over the expand/collapse icon. Normally clicking on this icon toggles the expand/collapse of the code; however, on an Ubuntu 18.04 Host running Workstation 16.2.2 this Windows 10 Guest VM needs to move the mouse about a 1/4 inch to the right (off the icon, approximately where the letter 'd' is in the image) for the expand collapse to take effect - very frustrating.  Its as if VS2019 is having trouble measuring where the mouse is positioned. 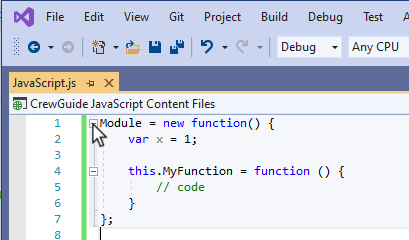 So the problem seems to be specific to Ubuntu as the Host OS when running 16.2.2.

I've also tested both Visual Studio 2019 and 2022 - both yielded the identical results.

Since my main development system uses Ubuntu 18.04 as the host my temporary solution has been to roll back to using Workstation 15.5.7 - however it would be nice to get this fixed/patched as I have 3D modelling VM's that need to use the new OpenGL functionality available in version 16.x.

When running 16.2.2, I also tried changing the hardware compatibility level but the problem is the same whether its 15.x or 16.x.

Ok this is getting to be a larger problem.

Still the same with version 17.

I switched to proxmox a while ago... full hardware passthrough and awesome performance !

Thanks! Saved me the upgrade cost for 17 and the time to test it. Still running 15.

Doesn't look like VMWare cares to look into this issue.