For years I have been using Parallels Desktop to to test software installs, making EXTENSIVE use of snapshots. At the moment I have a 1 year old Last Known Good that I have yet to delete, a 2 month old Last Known Good child of that, with some Windows Updates, and 20 child snapshots from there, each with a different 2023 Autodesk product installed, and each of those have a child snapshot after launching the installed software as a regular user. I switch back and forth between all but the oldest snapshot easily 20+ times a day.

As a side project I am doing some testing for a customer, using an ESXi 6.7 hosted VM setup by their IT consultants. Needless to say my workflow has to be different there, since more than one snapshot, or a snapshot older than a few weeks to a month, is crippling in that environment.

What I am wondering is, does VMware Workstation share those ESXi implications? Or does VMware Workstation, being a desktop hypervisor like Parallels Desktop, or for that matter Hyper-V, implement snapshots in a way that supports my snapshot happy workflow? I have other customers who ask about what hypervisor to use, and I would like to provide a more informed recommendation. And some already have VMware Workstation and I would like to be able to give them useful workflow advice. I would assume if Workstation is different from ESXi then Fusion is too, but I suspect I will always recommend Workstation because the GPU passthrough allows Workstation to be used in some other scenarios that Fusion is less suited for. But if Fusion and Workstation are not the same I would want to know that too.

Let me show you in a map what can be dome with snapshots.
Please note - the platform does not really matter !!!!
What matter is format of the delta.vmdk and the implemention in the GUI.

> Needless to say my workflow has to be different there, since more than one snapshot, or a snapshot older than a few weeks to a month, is crippling in that environment.

That is pure propaganda !!! Actually ESXI can still perform quite decent with a chain of 20 deltas in a row.
You are not supposed to do that because ESXi is supposed to offer a superior performance.
ESXi is not prepared to deal with snapshots used in a branch.
You are supposed to run without snapshots - then create a temporary snapshot - create a backup and then get rid of the extra snapshot immediatly.

By the way the term snapshot is very missguiding - you will develope a better understanding if you assume that you can attach up to 100 deltas to a single basedisk.
So the state of VM is represent by
basedisk from January + delta from Februar + delta from March and so on.

Basically only Workstation has a GUI to deal with trees - in ESXi, Fusion and Player the GUI is severly crippled. 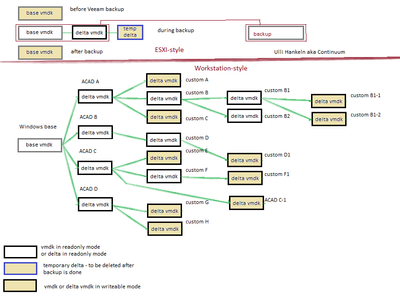 I guess my point is that with Parallels I don't have that tradeoff, I can have a lot of snapshots AND I can have good performance. So in that sense, the platform does matter. In the same way that platform matters if pure graphics performance and API support is paramount, Parallels Desktop doesn't support Passthrough or virtualized DX-12, so if you need high performance DX-12 support you can't virtualize on a Mac with Parallels Desktop, you absolutely must use Windows and VMWare (or maybe Hyper-V.

As for the map, that was super helpful. The biggest thing I understand better now is that some snapshots will be read only, while the latest snapshots are actually dynamic. This is very different from Parallels, where effectively ALL snapshots are read only, they are literally a snapshot in time of machine state, dependent on previous snapshots to create a complete image. If I delete a previous snapshot, it takes a long time to move all that data into the next generation of snapshots, and if a single snapshot being deleted had 5 child snapshots, then hard drive usage goes way up because now all 5 of those child snapshots have to contain the data that was in that one parent being deleted. But the key is that in parallels, a large snapshot structure like you show does NOT adversely impact performance, while in my experience it does, MASSIVELY, on VMware.  In any case, your lower "what is possible" map is what I need. My workflow can not be implemented using the ESXi approach. That said, the workflow my customer needs is much less intensely variable, and much closer to the idealized ESXi workflow, so perhaps I can finesse the workflow they need enough to make it work. It has been a struggle so far.

But on that front I may need to reevaluate too. All my VMware experience thus far has been with one host provided by a totally incompetent outside IT company. And on that host, simply restoring to a snapshot when the VM has 3-4 snapshots takes an hour. And restarting a VM takes half an hour and has a 50% chance of not happening at all, unless the host is rebooted first. We have now repurposed an old BIM machine, installed ESXi 6.7 and started some experiments, and so far performance on that new host is WORLDS better. Snapshots take 60 seconds to create or delete or restore. Restarting a VM takes 15 seconds and never requires a reboot of the host. So, it may be that some of my concern with VMware snapshots should really be concern with the host, and the IT clowns who expect to get paid for delivering a steaming pile of useless garbage.

As for why I started a new thread, chalk that up to a lot of time spent on StackOverflow, where asking a followup question in the comments on a related post is VERY frowned upon, so I decided better to start a new thread. It seems the forum is a bit more flexible on that, though I do see the value in keeping threads on (a single) topic.

My picture shows 2 different VMs with snapshots.
Both structure can be build on ESXi or Workstation - it absolutely does not matter.
Only difference is that with ESXi you have to do all changes yourself with WinSCP while in Workstation that can be done with the snapshotmanager - that is as long as the vmsd-file is healthy.

By the way - please lets stop using the term snapshots in this context. The much more appropriate term is redologs or deltadisks.

And I agree - have not seen a consulting company dealing with ESXi and vSphere that would have been a good help to your use case.

Feel free to chat via skype - it is an interesting topic ....
Ulli

FYI, Workstation does not offer GPU passthrough.
Only ESXi can do that.

As for different performances comparing vSphere & Parallels. One is running locally on your Mac host most likely has NVMe disks which do not suffer much from snapshots. The vSphere host that might not even have local storage... or use spinning rust.

@ Ulli the Fusion Snapshot tree is similar to Workstation, vertical instead of horizontal, but IMO it is not worse.