Since the upgrade to VMWare Fusion 12.2.0 (18760249), two VM's (Fedora 34 and CentOS 8.4) no longer work. The boot starts and, after a variable amount of time, the console loops on kernel messages "BUG: soft lockup - CPU#0 stuck for ..s!" Sometimes, I have enough time to complete the boot and log in. Most of the time, the lockup occurs during the boot

I tried to create a new VM from scratch using a ISO image of the Fedora "net install" DVD. The problem is exactly the same. Booting from the ISO image, the initial installation menu appears and the "soft lockup" issue appears right after the selection.

Note that I have 10 different VM's. The 8 other VM still work correctly: Windows 10, Ubuntu 21, Ubuntu Server 21, Debian 11, Linux Mint 20, Alpine Linux, Arch Linux, Gentoo Linux. The only affected VM's belong to the Red Hat family: Fedora and CentOS, including a fresh installation. The Linux kernel versions do not seem to matter: 4.18 for CentOS and 5.11 for Fedora, all other working VM's using intermediate versions.

The VMWare tools were installed in the guests before upgrading to 12.2.0. One time, I managed to boot, log in and reinstall the VMWare tools from the linux.iso coming with 12.2.0. It didn't change anything.

I have included a screenshot of the VM console and the vmware.log file.

Thanks for any help. 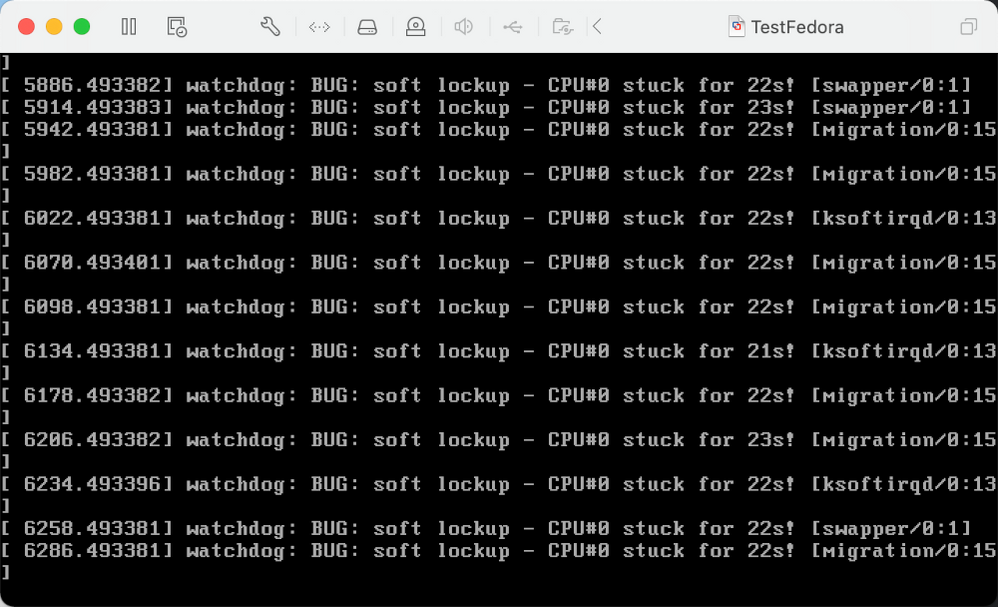 Zero reply after one week while this is a quite reproducible behaviour: cannot boot the standard Fedora installation ISO (as well as any Fedora and Red Hat VM which used to work before upgrading to 12.2.0). In short, VMware Fusion 12.2.0 + any Red Hat family guest = does not boot. This is a pity...

I have found a simple and radical solution, I switched to Parallels and gave up VMware Fusion.

All 10 VM's were successfully converted. The performances and the macOS integration are way much better. When I acquired my Mac, six years ago, I preferred to invest in a proven solution with a lot of success on Windows and bare metal. But this was a mistake. On macOS, the reference virtualisation product is Parallels.

I'm experiencing the exact same issue running VMware Fusion v12.2.1 on my Late 2014 iMac. Have you found any solution to this? I do not wish to switch to Parallels Desktop since I require interoperability with VMware Player/Workstation on Windows hosts for my work. What did you do to get the VM to boot in the one instance that you mentioned? Was it a fluke, or did you do something differently that might've made it work?

Thanks in advance, and I'm looking forward to hearing your thoughts!

One thing you can try is to make sure you're not overloaded the host.  No more than N-1 cores (N=physical cores, not virtual or threads) per guest.

Thanks for the suggestion, but I'm currently allocating 2 out of my 4 physical cores to the Fedora VM, just as I do with all of my other virtual machines, so that shouldn't be a problem. As a rule of thumb, I generally try to allocate half of my physical CPU cores to the VM.

Do you have any other suggestions that you think might help? This seems to be an issue specific to Fedora Linux and VMware Fusion, since I've installed various other Linux distros over the past few days with no issues. It also affects all of the Fedora Spins that I've tested thus far, even when their respective desktop environments are fully functional when running under other distros.

Thanks again for your help!

Same problem.  VMware Fusion is no longer usable after 12.2.1

This is a new problem that started to occur on ALL of my Ubuntu 18 and 20 VMs.. Reducing RAM or CPU count does not help. 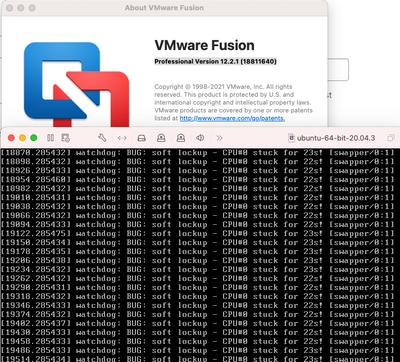 I've been seeing this problem ever since upgrading to Big Sur and Fusion 12.x. A couple of us ran into the stuck CPU issue on 2014 iMacs:

The hardware is fine. This same computer ran unattended for over a year with the VMs accessed via remotely via SSH while I was working from home during COVID. Brought the machine home, upgraded and immediately started to see the lock ups. It would happen only over night when the machine sat idle. Never while I was physically sitting at it. The frequency of the lock ups seems to have gotten worse with 12.2.0. I finally gave up and reinstalled Catalina and Fusion 11.x a couple of months ago. Since then I've had no issues and 100% uptime. Clearly the problem is in the later OS / Fusion versions - probably with the move to Apple's Hypervisor Framework.

It didn't matter which guest OS was used. I saw the lockup with various versions of CentOS, Fedora, Ubuntu and Alpine. I should note that running VMs under VirtualBox or QEMU on Big Sur did not show the same lock up. Only happened with Fusion.

Again, my work around was to roll back to Catalina and Fusion 11.

I'm currently running Fusion 12.2.3 on Monterey 12.3.1 on a late 2014 Intel Mac Mini. I just installed the Ubuntu 22.04 Jammy desktop (configured with 2 cores, 4GB memory, using both NVMe and SCSI virtual disks) and am not seeing this behavior - not to say it doesn't exist. Something is definitely odd.

I'll try some other distros and see if I can get any failures. Some random thoughts, though...

Have you tried completely completely uninstalling Fusion and all of its associated support files using the info from KB https://kb.vmware.com/s/article/1017838 , rebooting, and then reinstalling? (won't touch your VMs but have your license key handy since this uninstall will remove license keys).

Have you tried upgrading to the latest macOS Big Sur update 11.6.5?

Have you made sure that VMware Fusion is granted access to camera, microphone, and Accessibility in the Security & Privacy preference panel?

What type of virtual disk is being used (SCSI, IDE, or NVMe)?

VMware recommends open-vm-tools, and has for several years now. Most Linux distros have them available. Legacy VMware Tools are there to support older Linux releases that do not have open-vm-tools, and I'm pretty sure VMware doesn't put much development work into them for newer kernel releases and virtual machine hardware revs.

I'm currently running Fusion 12.2.3 on Monterey 12.3.1 on a late 2014 Intel Mac Mini. I just installed the Ubuntu 22.04 Jammy desktop (configured with 2 cores, 4GB memory, using both NVMe and SCSI virtual disks) and am not seeing this behavior - not to say it doesn't exist. Something is definitely odd.

Monterey is not supported on late 2014 iMac. I'm stuck with Big Sur.  I also am not seeing this problem on 2018 MBP Monterey. I've managed to load a running Ubuntu 22.04 under VirtualBox on the 2014 iMac, however.

I'll try some other distros and see if I can get any failures. Some random thoughts, though...n

Have you tried completely completely uninstalling Fusion and all of its associated support files using the info from KB https://kb.vmware.com/s/article/1017838 , rebooting, and then reinstalling? (won't touch your VMs but have your license key handy since this uninstall will remove license keys).
Would prefer not to go that route.  I have more important VM's that I do not want to affect.

Have you tried upgrading to the latest macOS Big Sur update 11..6.5?
Not yet. I wasn't aware of the point release.

Have you made sure that VMware Fusion is granted access to camera, microphone, and Accessibility in the Security & Privacy preference panel?
Not sure.

What type of virtual disk is being used (SCSI, IDE, or NVMe)?
Not sure. Probably SCSI (whatever the default is.)

Are you running your VMs with VMware Tools for Linux or open-vm-tools? If you have installed legacy VMware Tools, uninstall them, install open-vm-tools from your distro's repos, and retrain yourself to never install legacy VMware Tools from linux.iso into any Linux VM ever again. I'm sort-of kidding of course on the last part of that sentence, but really I'm not. There is zero need to use the legacy tools.
I assume VMware Tools. I just use the menu option. I don't know how to install open-vm-tools. I'll look into it. I doubt it will make a difference, though as creating a new Ubuntu VM from an ISO hangs.