On a macOS Monterey (macOS 12) VM, the screen will become entirely black after a reboot, and it's not usable anymore, no login screen etc... I use VMware Fusion Pro 12.1.2

A pain of being at the bleeding edge of an OS that was only announced in the last 24 hours?

I wonder if a Fusion update will need to be written and released for Monterey to function as either host OS or guest OS?

I can install the OS, it works, but after reboot it doesn't come up. For now the workaround is to use Parallels

There seem to be changes in the Virtualization framework under Monterrey including Virtio support - maybe Fusion update needed? I wonder if Fusion can turn off Apple framework and use (old) VMware kext to run as in Parallels.

The host is Big Sur, and the VM is Monterey so the framework change should not impact it.

First installed macOS Monterey which went all the way through until the end.
But then I had a black screen (no login)
Then I figured.. maybe it helps if I switch to the highly experimental VMware Fusion metal renderer (see my blog post ) Well... I saw the boot process a bit further. There was even a login screen, but after that my host crashed.
Never even got to try and login.
Tried it again and the VM hung.

Then I think.. hmm.. maybe if I update VMware Tools to the latest before upgrading... so I did and started the upgrade process again.
An hour later.. black screen. Switch to appleGPU0 -> host crashed.

It doesn't want to work for the moment it seems.

What hardware are you using, Wil?

A tad convoluted, but here are my steps:

It hangs a tad coming up (normal with the Apple GPU), but it gets to the desktop and things work as we'd expect (tho I haven't done a ton of digging)

The Guest crashed (kernel panic) a few times doing random things... going to the account page in system prefs did it once,

(I'm not sure if I'm allowed to share screenshots until the beta is made public, so I'm refraining for now until I read the license more thoroughly (MY FAVORITE PASTIME!))

This is on my Late 2014 Mac mini and I have 2 cores assigned out of 4, intel i5-4278U.
IOW at the lower end of what would be supported.
Works fairly OK with a Big Sur VM in the same config.

I tend to refrain on running on my main MBP when it is too beta as I can keep on working undisturbed in case something bad happens. FWIW, I do connect to it via screen sharing, but have a screen/mouse/keyboard attached just in case I need it.

Tried changing the NIC to vmxnet3, but it didn't matter.
Another host crash.

Side Channel mitigation was disabled all the time.

Will see how stable it is. With all the host crashes so far I'm not expecting too much, but this is at least promising. Thanks Mike for the extra vote of confidence.

Finished writing my post.. and by the time I was done.. 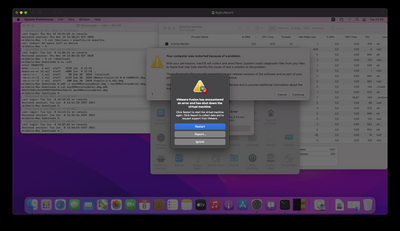 I'd say that it is not very stable, yet (but will keep on trying). 😄

Day two and it's functional at all?  Nice!

No sarcasm there, just hopeful that maybe the usual Apple plumbing changes aren't as massive this go around.

Try setting auto-login to ON before upgrading, got past the black screen and landed on the macOS 12 desktop with this warning.

Installed macOS 12 Monterey in a new “macOS 11.0” (BTW, with the new version naming, you should probably change the name to “macOS 11”…) VM, after creating the boot .iso image manually (the built-in Fusion script didn’t work and neither did the linked script from GitHub), with hdiutil and createinstallmedia; and so on (see also the posts above)… It certainly works faster with the experimental graphics driver, but one must say that it is quite unstable, indeed: sometimes booting the VM requires several attempts, with kernel panics in the VM (and sometimes there are kernel panics in the Monterey VM also with the traditional, non-Metal graphics driver): but all in all it works surprisingly well, for a new OS! Test machine: Intel MacBook Pro 15”, late 2013 model (wow: Monterey on an unsupported Mac, and in a VM!). BTW, in Parallels Desktop I could install Monterey directly from an USB flash drive, which made it a little easier: and, as often happens, it is faster than Fusion, with the Metal graphics driver. (It’s a real pity that the Metal driver is not available in Catalina and Mojave: that would have been really great, indeed…)

in the VM’s config file (the default network adapter doesn’t seem to work, in Monterey).

Here’s also one of the first tutorials on the web for Monterey on Fusion:

BTW, at least in my case, it wasn’t necessary to modify or add machine models or serial numbers: it just worked out of the box…

DaveP
Commander
You can install from a USB flash drive in Fusion as well. Just ensure the USB key is attached at boot to the VM via the USB settings.
0 Kudos
Share
Reply

I thought that USB boot in Fusion still required the additional Plop boot manager*: so, now it works out of the box…? That would be cool, indeed…

Yep VMware EFI firmware has been booting USB drives for years. I just finished installing Monterey VM from a USB drive a few minutes ago. Drive was created with the createinstallmedia tool.

I had no problem on a test machine, i had installed the first developer version osx 12.0 and used the newest fusion version 12.1.2.

Think, that is the first developer version, any application will have problems to run correctly, thinkertools don't start on osx 12, also other application. This developer is for developer to test there app and application.

The same is for ios15, ipados15 and TVos15, here the are more thinks not working.

I am trying the public beta.  Upgraded a Big Sur Public Beta VM that had tools 11.3.  Apple GPU produced a color static screen and did not work.  Had to use vmxnet3 for the network.