A few months ago I upgraded my MacBook Pro (13-inch non-Retina, Mid-2012) to macOS Monterey using OpenCore Local Patcher. The VMware Fusion installation I had on there stopped working. A few days ago I updated VMware Fusion to the latest version and now it runs but every time I try starting a VM it throws an error saying "Transport (VMDB) error -14: Pipe connection has been broken". I'm including a screenshot and a log file, hopefully someone can find a solution since I tried a bunch of other fixes for error -14 and none of them worked. 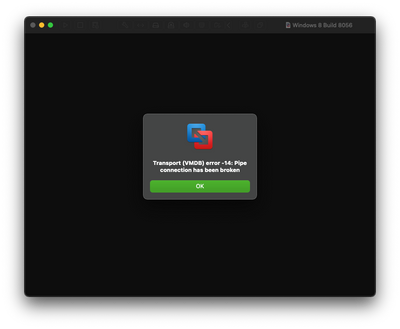 You are running on an OS/Hardware combination that neither Apple nor VMware supports. In which case, there is no solution. Fusion depends heavily on capabilities provided by both the hardware and the operating system, and that support is built for macOS releases and the hardware that Apple supports those releases on.

Fusion is also developed to exploit the CPU and graphics card capabilities that the system provides. It's likely that while you unsupported installation may work for many applications, Fusion wants something that it expects to be in a supported macOS configuration but isn't there - hence the guest crashes with a -14 error.