VMX option to disable use of XSAVE instruction under Big Sur

I am running Big Sur on "unsupported" hardware - a Mac Pro 5,1. With updated graphics and WiFi/BLE it is actually running without patches,

To avoid KEXTs VMware 12 is using some extended instructions  like XSAVE under Big Sur. Parallels still allows using it with KEXTs and works fine right now.

Is there a VMX parameter to disable this?

monitor.allowLegacyCPU = "true" does not do it.

I see what you're saying regarding the specs on VMware's site, however they are correct for the most part.  Fusion 12 will run on any 2012 Mac Pro, except on that one Nehalem CPU (W3565), and any 2010 except the quad core's, which are Nehalem.  They obviously know they're using CPU functions that do not work in the older Nehalem's, but do work in Westmere's.

Considering that the last officially supported OS on the 2010/2012 5,1 Mac Pro is Mojave, their requirements that you quoted are accurate.  In fact, Fusion 12 works fine in Catalina as well - they just don't tell you that because it's unsupported.  The reason it works is because VMware loads kernel extensions (KEXT's) in Catalina and previous OS's.  In Big Sur, they've moved on to using the newer system extensions, and in doing so, are using a CPU function called XSAVE, which the Westmere CPU's do not have - that's why it doesn't work.

VMware Fusion 12 will run fine in Big Sur on any Mac that officially supports Big Sur.  I too was hoping for a better answer, especially considering Parallels is using system extensions for both Parallels and Apple's hypervisors, and they both work fine.  In the Parallels config, you can switch to using the older kernel extensions if you like, for the time being, until Apple doesn't allow loading KEXT's anymore (which "a future version" will do).

If you want to run Big Sur on your 5,1 Mac Pro, you will need to migrate to VirtualBox (shudder) or Parallels.  VMware have spoken (or, in this case, not spoken), so what's done is done - they moved on.  I can't blame them really.  In any case, their specs are correct.

I would like to request for VMware to consider adding a setting to allow VMware Fusion to function without the XSAVE processor function.  I have been using VMware Fusion for many years, and I pay for a Pro upgrade each time there is a new version.  I like the licensing model quite a bit as compared to the competition, and I really like that I can move VMs back and forth between my Mac and Windows servers.  I am planning to continue using my 2010 Mac Pro for several more years, and I would really like to be able to use VMware Fusion past v11.5.  Perhaps the Fusion developers might consider adding some sort of switch to allow VMs to function without XSAVE?  I don't mind if there's a performance hit - it would be better than nothing.

It's not an option for them - it's a limitation of the Big Sur hypervisor, which is on apple.  The next version of MacOS won't allow any kext's at all, so every virtualization product will be in the same boat.   It's unlikely that MacOS version will run on outdated hardware at all, even with community hacks.

It's actually not on Apple, and it's not Apple's hypervisor.  VMware has used the CPU function in their implementation of the system extension.  Parallels gives you the option to use Apple's hypervisor, and it works fine - I'm running it now.

Are you running Big Sur or something older?

Big Sur, of course - that's what this topic is about after all. 😛

Here's a screenshot for the non-believers. Notice the hypervisor is set to "Apple", and that the VM is running, on a 2010 Mac Pro w/Big Sur 11.2 beta even. This is not an Apple issue - it's 100% on VMware. As I've said before, I don't blame them for moving on - that's their prerogative, just don't let them tell you it's Apple's fault. 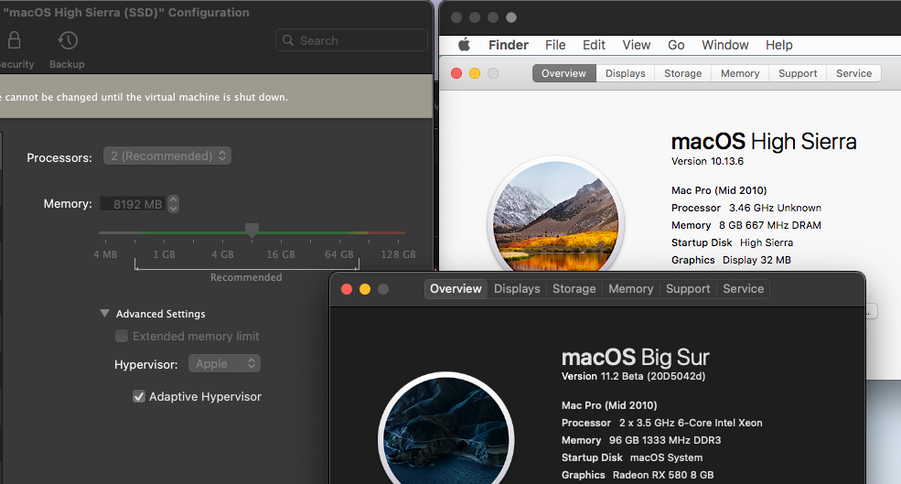 Well, I'm in the same boat. Poweruser with a maxed out cMP 5.1 running the latest Fusion Pro for several years.

After upgrading to Big Sur I have to switch to Parallels and it is very unlikely I'll come back later unless Parallels screws their product completely.

VMware, if you want to keep me as a customer, leave at least a comment, that you are working on a fix. Otherwise I say goodby.

These are user to user forums, so don't expect a response from VMWare.  The hardware/OS requirements are pretty clear - expecting a third-party vendor to support a configuration that apple doesn't, isn't realistic.

And, with the next MacOS release, due out this fall, will eliminate the kext structure that parallels uses to get around it, so the end of life is in sight in any case.

Once again, Parallels isn't using KEXT's in Big Sur, unless you edit the config.xml to change "UseKextless" from "0" to "1", in which case then it will.  Parallels gives you the choice of using the Parallels or Apple hypervisor.  As I've pointed out, the Apple hypervisor works fine.  VMware have chosen to use XSAVE, and that's fine, but what I have a problem with is them telling people it's Apple's fault, when that simply isn't true.

PS - I've run Parallels both with and without KEXT's, and it works both ways. They have some networking issues to resolve in kextless mode, but otherwise, works fine.

Fair enough on the kext issue, but the rest still stands.  I suspect it's more of a coincidence with Parallels than a deliberate choice to support unsupported HW/SW stacks.    Hardware marches on - We went through this with firewire.  I had to replace my perfectly good amplifier because Apple no longer supports TOS connections.  And of course, this will get a lot worse in the future when Apple drops support for intel machines completely.   We almost need a hardware subscription option 🙂

I've installed the Demo of Parallels 16 and migration of the Fusion VMs is very easy. They are converted behind the scene when you open the Fusion VM for the first time in Parallels.

For those who want to give it a try, do the following things while you are still on Catalina or older macOS with a working Fusion:

For some reason bridged network mode didn't work in a Windows VM and thus I switched it to shared network for a quick fix. Have to investigate, whether this is a general issue or something special with my network (I'm using 2 ethernet ports in bonded mode)

I'm not a fan of Parallels' licensing scheme which doesn't allow you to install the software on a laptop in addition to a desktop. And they ask for paid upgrades almost every year.

But other than that, the software fits my needs.

For those of us currently running Big Sur on a Mac Pro 5,1 through OpenCore (0.6.6 in my case), is there a way the relevant kernel extension(s) might be pre-loaded via OpenCore itself? Would pre-existent VMs run on VMware Fusion 12 then?

There's a discussion on MacRumors where they talk about using the processor spoofing capability of OpenCore so that the XSAVE instruction appears to be present.  Unfortunately that does not help.

Clearly the specs are not correct; see below.  If the 2012 Mac Pro was not supported, then why call out specifically the 2012 model?  BTW, I just clipped that from the VMware website moments ago.  In fact, it appears they are specifically calling out the group of Mac Pro enthusiasts that are running newer OSs on their old hardware. 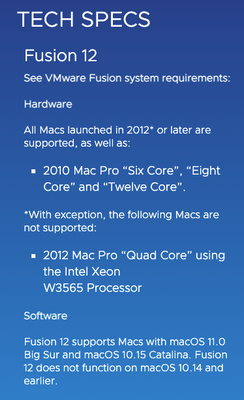 Nowhere does it say Fusion 12 is supported on a 2010/2012 (5,1) Mac Pro in Big Sur.  Fusion 12 does work fine in Catalina, due to the fact Fusion 12 uses kernel extensions in Catalina, but has moved on to the new system extension method in Big Sur, which uses XSAVE, which our CPU's do not have.  Look, you're beating a dead horse here - move on to Parallels - I did, and am happily running Big Sur 11.2.3 on my 2010 Mac Pro.  If you really want to keep beating this dead horse, don't do it in a public forum - write to VMware support, where they'll actually read what you have to say.

Feinberj - I put a sticker on my empty beer bottle that says "FULL", yet there was no beer inside.  Doesn't matter what CPU ID you're trying to spoof - XSAVE still isn't inside.

What part of the screen shot that I posted says the 2010 and later Mac Pros are not supported?

Very often, spoofing something will get you where you want to go.  OpenCore on the Mac Pro spoofs the old Mac Pros to look like iMac Pros, so you can install Catalina and Big Sur when normally you would not be able to do so.  I was wondering if spoofing the XSAVE flag would work, or if VMware Fusion actually used/needed that extension.  I guess it does actually need it, so spoofing does not help in this case.

So, I'll keep my position that it would be really nice if VMware could have the option, under Big Sur, to not use/require that XSAVE instruction.  I'm not looking forward to switching to Parallels, but I'll have to do so once Apple stops releasing security updates for Catalina.  I probably have about a year and a half to go.

themotoman - Re-read what I wrote. You're looking at this backwards.  Show me where on VMware's site it says the 5,1 Mac Pro is supported in Fusion 12 when running Big Sur.  Fusion 12 does run fine in Catalina.  Why they support Catalina on the Mac Pro is beyond me, but that was nice of them.  Let it go man, let it go...