While using windows 10 within VM Fusion 12 on Big Sur, screen goes black for a few seconds then will come back with a few flashes.  Sometimes requires some input in order to prompt this.   Almost like it has to redraw the screen.   Sometimes occurs in close succession sometimes can be quite a while.  When happening in close succession it becomes unusable.  This was created to seperate out my problem from that of the “flickering” problem also mentioned in this forum.  This problem does exhibit a flickering as it redraws from black and could be considered a flicker but realised the issue mentioned elsewhere is a constant monitor flicker rather than a flicker while redrawing.  Not sure redrawing is what it is doing but not sure how else to describe it.  I’ve seen this sort of thing occur when there is a memory leak but I have not confirmed that is the case.

First make sure that your VM is using the latest virtual hardware.

With the VM shut down, not suspended, go to menu "Virtual Machine" -> "Settings" -> "Compatibility" and set it to the latest available.

If that was already the case then have a look at  the following thread for a few possible workarounds:

If that still does not help then make sure the VM display has enough RAM set for the display under menu "Virtual Machine" -> "Settings" -> "Display" -> "Shared graphics memory".

Tried all work arounds from Big Sur Flicker.  I was previously working under that one but then saw a video of what was meant by flicker.  Mine is a slow flicker like windows is trying to constantly redraw because of a change in resolution.  Latest version latest VM hardware.  Today it stopped flickering logged my out of the windows CM and decided to stick with XGA on a 4K monitor.  So Restarting the VM.  Only time I have seen this kind of behaviour was in Fusion and I believe it ended up being a memory leak.

Ramped the GPU memory all the way.  No change regardless of Nvidia or Intel Iris Pro.

I think I see similar issues to you.

I use Windows 10 in my VM and I ma quite a heavy MS Teams user, the majority of the time the VM behaves it's self, but if I have outlook teams and chrome running, the screen begins to go on and off, it's about 500ms off then back on. It's enough to become frustrating while working. This slowly gets worse and becomes more regular, before the VM then resizes the desktop to 800x600, and then I am logged out of windows automatically!! No warning.

I've just been looking through the Event Viewer in my VM and I can see a lot of errors relating to dwm.exe

DWM is desktop windows manager,: https://www.howtogeek.com/howto/windows-vista/what-is-dwmexe-and-why-is-it-running/ and I suspect maybe it's used for rendering MS Teams and the screens being be presented some how? I don't know.

Anyway, I just did the following:

So far things seem better, but it's early days.... I will know buy the end of the day if it has worked for me.

That didn't fix it, but I'm pretty sure this is somethign to do with the problem as I am seeing a lot of these errors when things start to go bad!

Interestingly enough when playing sound from the VM, my screen goes black and starts flashing on and of (looks like it is constantly trying to resize) then if the piece of sound is particularly long it goes to 800x600 then logs me off and logs back settles at 1152x864.

@robkersey Is there a link between sound and your problem?  I thought that if teams is setting it off for you it might be sound related.

Interesting!  Before I logged out after being moved to 800x600 I did catch site of a message saying that the GPU driver had failed.  I have tried reinstalling tools.  Not sure of there is a different driver I can use with VM Fusion.

New development that makes me suspect the VMware tools display driver.  I tried reducing my resolution to solve this problem.  When the screen flashes it resets to the maximum supported screen resolution.  Most odd.

I have the EXACT SAME PROBLEM.

And I need to use my Windows VM for work.  I am in the middle of typing something and then the screen going black for a few seconds happens.

I need a FIX!  I just paid a lot of $$ to upgrade and expect my software to work!  So much for QA these days!

I'm not from VMware, but a few things to try.

- Turn off 3D under display. Does it still happen?

- Turn off automatic resizing. Are you on full screen? If so, go to settings -> display -> under the "Full screen" drop down choose either "stretch...." or "center..."

I'm trying these again as I have not tried them since 12.1.

@pgeremia I would suggest whatever you do, do not update windows.  Or as least do a snapshot before updating as my update made the VM unbootable.  Have you logged a support ticket with VMWare?

@robkersey Any changes in your environment ?

All combinations tried.  No effect for me.

I have tried many things and have not come up with a solution.  Thanks for those suggestions they did not help.

I am working with a VMWare tech support person.  I actually sent them this thread because he claimed they did not know about it.

This is a really serious issue and I rely on the VM for work and it is making my life pretty miserable.

box in the center of the screen.  Eventually it gets so bad that it terminates my login.  This clearly is Big Sur related because I was running

This happens every time the screen blanks out. 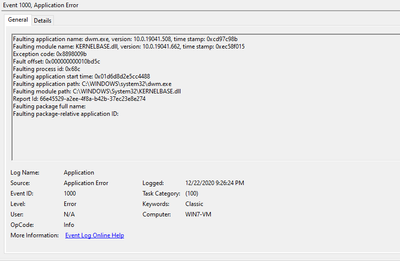 The other thing I noticed that is with Chrome running with a lot of active tabs makes the situation worse.

@pgeremia did you disable google chrome hardware acceleration?
It has always caused trouble in VMs and is generally recommended to turn off.

Same as I get on my VM, running win10. is this is a VMware tools/ vmware display driver issue??

Would this matter if I do not run any chromium based software in my VM nor do I run office.  I run those in my MacOS.  (BigSur)  Upgrading to Fusion 12 Pro and Big Sur was the worst mistake I have made so far.

Seems to me that the FLICKER problem and SCREEN GOING BLACK are related.  And there is NOTHING I can do to stop the problem, only make it not as bad.  For example not using Chrome will make it not as bad, but it is still there.