Base System Device driver is missing

I have a VMWare fusion 5.0.3 Windows XP Virtual Machine, where the the Base System device driver is missing - showing a yellow icon, and causing the annoying New Found Hardware Wizzard to show at startup every time.

The Hardware IDs are:

I tried to re-install several times the VMWare tools, no help. This VM was originally on a previous version of VMWare, that I copied to this PC after it was updated to Fusion 5.0.

The vmx file is attached.

Thanks in advance for your help.

You need to completely uninstall, not repair install/update install, VMware Tools then reboot and install VMware Tools.  Have you done that yet?

You need to completely uninstall, not repair install/update install, VMware Tools then reboot and install VMware Tools.  Have you done that yet?

Thank you - uninstall and do a complete install of the VMWare tools solved it.

I am encountering this same issue under Windows 98 with VMware v12.5.9.

Removing and re-installing tools did not help.  VMware Tools themselves are working properly, as is the operating system itself.  There also is a crash of the VmwareService.EXE when it is attempted to be restarted during the Repair Installation of VMware Tools, but not on the first time install after a clean removal as you instructed above.

Using Windows 'System Information' utility, it is the same problem device reported by the OP:

Windows simply does not find the appropriate driver for the device. Maybe you forgot to include it on the tools installation media for Windows 95/98/ME?  What is the driver file name/location, is there somewhere else I can get it from?


I am encountering this same issue under Windows 98 with VMware v12.5.9.

Removing and re-installing tools did not help.

That statement misses an essential part.. and so we still don't know if you did that correctly.

Did you reboot the VM after uninstalling VMware Tools?

To clarify.
Yes, that reboot is essential as Windows marks files ready to delete on boot when you run the uninstall.
If you skip that reboot and immediately run the install after uninstalling, then at the of the install when it prompts you to reboot for the first time, your freshly installed drivers will be gone after the boot.

Yes, I did reboot after uninstalling before re-installing.  The base driver still is not to be found on the system ...

After shutting down the Win98SE VM, I opened the VM Bundle file of the VM using "Show Package Content" (in Mac OS)
(the bundle file contains the hard disk image, and many other files).

Then I copied the .vmx file (it is a text file) which is inside (at the top level) and pasted it on a Windows PC (or another working VM), in order to edit it using Windows Notepad. In fact I was afraid of using Mac TextEdit, as it might change the line feeds / carriage returns at the end of each line of the text file to Unix style.

I changed the following line:

then transferred the modified file back inside the VM Bundle (keeping the same name, after renaming the original file).

Then I rebooted the Win98SE VM and voilà ! The "PCI System Peripherals" item with the yellow exclamation mark disappeared and did not show up again, even after hitting the "REFRESH" button.

In fact, Win98SE is unable to handle the VCMI Device, so it makes no sense to keep it active.
The advantage of this solution is that it works with the latest HW version of the VM (version 19).

That certainly is interesting as it pinpoints where the problem is.

Beware though that VMware Tools nowadays expects VMCI to be enabled and functional.
See also: https://docs.vmware.com/en/VMware-Tools/11.3.0/com.vmware.vsphere.vmwaretools.doc/GUID-6994A5F9-B62B...

It's possible that things like Shared folders do not properly function (can you try?)

edit
Tip: You can edit the .vmx file much easier. In the library, with the VM shut down (not suspended), right click on the VM, hold down the "option"  key and "Show in Finder" changes into "Open config file in editor"

VMtools 11.3 would not begin to install on Windows 98 SE I would think?

Yes this is some stock advice I see from googling.  Setting the USB controller to USB 1.1 also gets rid of a device as Win 98 SE does not know USB 2.0.

VMtools 11.3 would not begin to install on Windows 98 SE I would think?

All good points, you're probably right about it not being able to install the latest 11.3, I will try later on.
Disabling vmci might be the better solution, I'm just wondering out loud about any side effects (if any) of doing that.

I booted my Win 98 SE back up and could drag a text file from my Monterey 12.1 iMac to the guest in Fusion 12.2.1 and the startup sound still works so I am not seeing any issues?  I realize that one of the minor missing documentations in VMware is a recommended hardware level to operation system chart.  I settled on an approach where I looked at what VMware hardware version was current when the operating system was released.  For My Windows 98 SE guest I use VMware hardware version 9.  In my mind it would be counterproductive to present Version 19 hardware to such an old operating system?

Everything works then.. as expected.

It is interesting to know that it works on later virtual hardware versions as there's always a risk of VMware removing support for the earlier VH versions in an update later on.

I did the test with the VMware Tools.
As you correctly imagined, Shared Folder does not work.

But this seems to be a general problem with Win98SE VM's.
In fact, I tried to revert back vmci0.present = "TRUE" in the .vmx file, reboot the VM and the problem persisted: 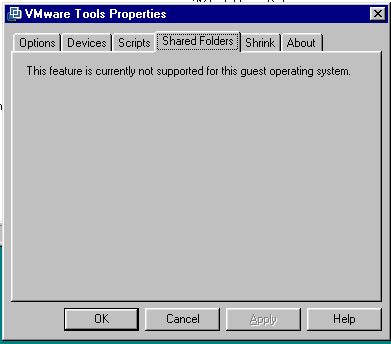 In addition, after the boot, I got an error message in Windows:

I have Fusion 12.2.1  and VMware Tools 7.7.0. This is the version of VMware Tools that were installed automatically on the Win98SE VM. The install went without any problems.

In my opinion and according to my tests, the "fix" that I presented before (i.e. setting vmci0.present = "FALSE" in the .vmx file) does not introduce any additional limitations. Setting that flag to "TRUE" will bring back the "PCI System Peripherals" device with a yellow exclamation mark in the Windows Device Manager, and this does not make things better, since there is no suitable driver for it.

Maybe this is something that VMware should provide/fix in one of the next VMware Tools version?

And besides the missing "Shared Folder" feature (regardless of the setting of the vmci0.present flag!), all the other VMware Tools features work even with vmci0.present set to "FALSE":

USB also works, after changing USB version from 2.0 to 1.1 in the VM's USB settings (as suggested in other forum discussions). I also had to install an additional driver not natively provided by the Win98SE install CD to get USB working:

nusb33e.exe (which can be found in the internet).

Instead of using Shared Folders to get files in & out of the VM, I can now use a USB memory stick, or simply drag & drop the files over the VM's window. So that's not really a limitation.

Do you think that setting an older hardware version for the VM would enable Shared Folders on Win98SE ? Which one?
Would that change imply a lengthy rebuild/rescan of all Windows drivers on the first boot after the change?

And thanks for the tip on how to edit the .vmx file. Very useful. I wasn't aware of it!!