So we have had partial success with testing out a stretched storage SRM pair, but never full success. We are at a loss for ideas now, so I'm hoping someone here in the community might recognise one or many of these problems we've seen and may know how to resolve them.

I've split our problems into 3 posts so not to end up with crossed wires! I'll link to the others at the bottom.

For vMotion enabled Failover, the Recovery (containing Stretched Storage) appears to hang at 3% (for Datastore Policy) or 1% (for a Storage Policy). When this occurs, there are no updates on the Recovery Steps UI.

The Recovery will eventually complete successfully without having provided any further updates, The report after completion is equally blank of data - stating "Inactive" on the results column for every step after 1. 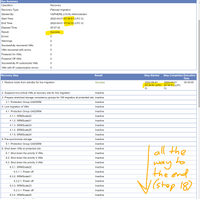 I'll state our environment and what steps we've taken to create the setup too as additional information that might help:

Other Issues we've had:

Given the number of posts you've created, have you considered opening requests with VMware Support?

Carving this up in multiple posts doesn't make it easier, as one problem probably is related to the other, actually I am pretty sure about that. I would suggest, just like Scott, that you create a Support Request. If you don;t have active support than I would suggest looking at the log files of the Storage Replication Adaptor first, as my guess is that that will give you a better hint of where to start. (the initiator issue is my guess is what is causing these challenges.)

Hello at @scott28tt and @depping, thank you for taking the time to reply to me.

In answer to both of you, yes, I have already opened a support ticket - however as it has been open for 100 days now without any response, I thought I'd come to the community where I have actually recieved responses in the past!

Anywho, following your second part @depping, the SRA logs show happy responses in all cases, which leads me to believe it is a setup issue. Much like you say they are probably all related. I thought that if anyone else sees a similar symptom, it will be easier to find in the carved up posts (where I can say what has fixed it - I'm still hoping!).

I will say (as it might not be clear), this hanging failover issue only happens on one of the setups, and the failover vMotion - cannot complete file creation operation happens on the other SRM pair setup. Not on both. The missing initiators problem occurs on both - though that is after failover (during reprotect). For that problem I've left another comment on there for you for some clarification on what I could look for to help resolve it

Okay, let's start at the beginning then:

What type of storage do you have?

We are using fiberchannel to storage array managed 10K SAS

(also sorry about the late reply, I was on holiday)

You really need to provide more info than that 🙂

What is the ticket number? Let me see if I can get it escalated to get a response.

Sure, I'm happy to continue these over there too.

you sure that is a VMware case number?