One of our pools is demoing the Microsoft Teams redirection via Horizon, and while 99% has been good (real good I'd say), we have seen one minor bug. I think?

The media optimization is working perfectly. The user is using Teams within a Horizon 7.13.1 agented Windows 10 20H2 VM, and before the redirection he complained of poor mic/video quality. Once we added the optimization it all started working real well. Optimization working as expected.

The one issue he's seen, is in Teams, he doesn't have the option to pop out chats. The menu option is missing. Here is a screenshot of mine: 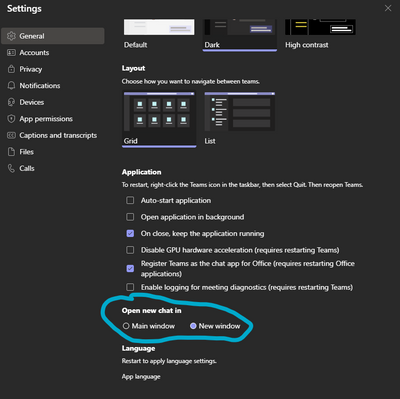 Where I've circled, he doesn't see the section at all. Language is right under Application and that's that. I'd chalk it up to a Microsoft bug, still may, but he's on the latest version of Teams, as well as the latest version of the Horizon client. And truth be told he isn't the only person seeing it, just the only one that notices I think because he's on so many meetings. On my test VM I wasn't seeing it, I updated Teams to the very latest (it was a bit old), and I still don't see it. On my everyday VM workstation, latest Teams, I also don't see it.

Comparatively, on a PC I have with the same exact version of Teams, logged in with the same account every time, I see the option to pop out.

Is this a known drawback of the Teams redirection, or am I missing something?

There are still feature differences between the full blown Teams client for desktops and a Teams client running in Optimization mode for VDI. This is probably one of those features because I can imagine opening lots of Teams windows will eat lots of resources...

Please choose "accept as solution" if this solved your problem so others can benifit from it too.
1 Kudo
Share
Reply

Could you please confirm what version your teams client is? Mine is 1.5.00.4925, in optimized mode, I can see this option in Settings-General and in chat window.

My Teams version today within my VM is 1.5.00.4689 (see below). Just updated now actually. Not sure why I can't get the new version you have. What's your OS for your thick client install there? Both my instances detailed below are Windows 11 Laptop (working) and a Windows 10 20H2 VM (not working).

You can see between Application and Language there's no choice for open new chat in a new window: 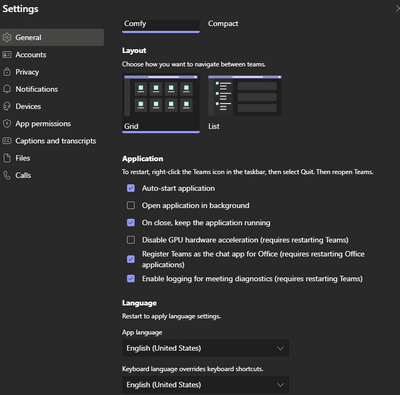 But on my Windows laptop, same Teams version, I indeed have the option to pop out: 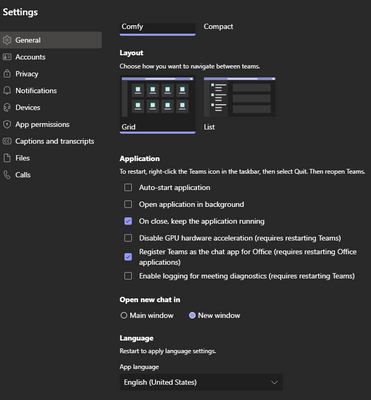