Hello i installed vmware fusion and download windows for arm but the vmware doesn't see the vhdx extention file which is windows 10 for arm. Does it have support for windows for arm? Thanks

If I were to get the VHDX and convert it would that work?

Yes it will. But beware of the guidance in the Tech Preview Testing Guide. It is too easy to use the qemu-img command line that's posted in the guide and find yourself creating a file that can't be booted, and destroying the original in the process.

See the unofficial Tips and Techniques for the Apple Silicon Tech Preview 22H2  document for more fool-proof guidance on how to convert that VHDX file.  And it also gives advice on installing the VMware Tools earlier in the initial setup sequence to avoid having to disable the networking checks in the OOBE.

I went the iso route and everything just worked.  I drag/dropped the iso file into the new vm wizard and manually changed the os type to win 11.  After that, everything was smooth.  It didn't set the guest type properly, but otherwise no issues.

I must say I a really disappointed by VMware that there seems no priority to officially support Windows ARM any time soon on Apple Silicon. I bought VMware Fusion 12 Pro just this April on the last months of my Intel Mac and thought "Should be good investment, they committed long time ago, in worst case I can buy an upgrade license".

But I only see some hacky ISO workarounds and a still experimental demo. You just lost me to Parallels. Sorry, but easy to use, realiable Windows virtualization still is the most important use case for me.

They were stuck with legal restrictions for months.  Now that that's resolved, I'd expect much more rapid iteration and improvement in support - they're well aware of the demand for the capability.

The ISO issue is Microsoft's, not VMWare's.  IMHO Parallels is doing something not-quite-kosher to download the code, and in my testing it has a number of issues that have driven me to switch back to Fusion for almost everything now that it has usable support.  It's honestly still early days for all three (Crossover being the other one), and none of them work perfectly for everything at the moment.

I used build 25179 VHDX from the Windows Insider program. I converted it using QEMU. I have Parallels 18, UTM and VMWare installed right now.

I find it interesting that VMWare and UTM both fill in the Processor category in Device Manager with something for all four of my processors.

Parallels, however does not fill in that Device Manager category at all. No processors are listed in Device Manager. Windows thinks it is whole in the Parallels VM. System > About 'Device Specifications' lists the Processors thus: Apple Silicon 3.20 GHz (4 processors)

Yes, it is very interesting. Having no processors listed in the Windows Device Manager is certainly very strange for a Windows system. I have a Windows 10 PC and my CPUs are listed in the Processors. Same with a Windows 11 VM on Fusion on an Intel Mac.

But IMO just prettying up the CPU identifier does not mean Windows is "whole".  They've just hacked things to make you think so. Don't let what Parallels does fool you into thinking that Microsoft is supporting Windows 11 on Apple Silicon. Or assuming because you've purchased a retail Windows license and activated it on Windows 11 that you have a supported configuration.

None of these mean that Microsoft considers Windows 11 running on Apple Silicon hardware a supported configuration. They do not. Apple Silicon is not listed in Microsoft's supported chipsets for Windows 11. Microsoft has said in the past that they have no plans to do so - and they have not updated that guidance. If something goes wrong you go back to Parallels or VMware. Not Microsoft who has every right to turn a deaf ear because you're running an unsupported configuration.

Windows 11 does work today on Apple Silicon virtual machines and Microsoft has seemed to ease up on licensing and activation, but that's about all you can assume on all Apple Silicon hypervisors.

Well supported or not, "whole" configuration in Device Manager or not, Parallels has achieved that my target applications run without any hassle. And besides MS Virtual C++ this includes a quite X86/Win32 emulating challenge: Heroes 3 HD. I don't care for any perceived problem.

One competitor is able to offer me what I want, while VMware is not able anymore. I admire a clean implementation and of course in the long run, it often is also a reason to buy (stable reliable safe secure corner cases), as for example USB to guest is a thing e.g. Virtual Box often had its problem (where I needed it for signing the Windows binary I compiled in the guest with the hardware token for SSL-EV), and QEMU is too slow and uncomfortable.

But all those consideration are moot if the one runs and work, while the other does not.

And in the end, that's what's important: can you get what you need to do done.

However, if you can share feedback withe VMware about what doesn't work for you (through the survey links on https://communities.vmware.com/t5/Fusion-Tech-Preview-22H2/ct-p/3022 or by emailing to fusion-beta@vmware.com ) it'll help the cause.

You will get the update.  MS doesn't release it to everyone all at once, but rather releases feature builds in expanding rings to users to get telemetry feedback about issues....expanding the release rings if no major issues are reported or persist, stopping release if major issues start to show up, expanding or issue fix and again expanding release rings to more users...  So you will eventually get it over the next couple weeks.  Or you can use local group policy, gpedit, to jump the line and get it right now.    Just set windows update to target the new build number "22H2 and it will pull the update today.

So again you can wait and keep checking windows every few days or just set windows update to target the new build, like I did and get the update now,

first, backup or take snapshot of your VM just in case 22H2 has issues in as a VM on your system - you can easily revert, then proceed:

VMware priority is for vsphere, not vmware workstation and fusion.  Parallels has a different customer focus - desktop VMs, rather than datacenter.

But parallels is not without is's issues. You still can't change network type via UI, and zero settings change options for the OSX VMs.   I have so many issues with OSX VMs running in parallels on apple silicon.  Two open tickets still unresolved over the past 6 months - one crashing issue, causes host macbook pro to crash/reboot.   They just keep asking for the same log files over and over and keep asking me to repro.  super easy repro.   Any time I ask for update to the ticket, they keep sending me KB telling me to adjust my settings - which is not averrable yet in parallels for OSX VMs.
they do have settings options for Windows 11, but none yet for OSX VMs. 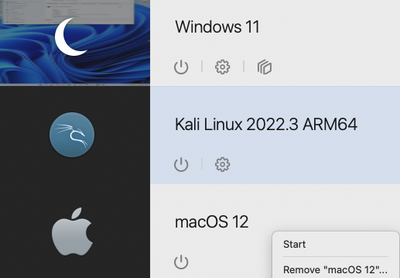 there is this Blog

there is this Blog

Which is over a year and a half old. Much has changed since that time.

Posts in this Fusion 22H2 Tech Preview Discussions forum and other resources in the Fusion TP 22H2 Tech Preview Documents section give a much more accurate portrayal of where VMware is today with Fusion on Apple Silicon and its support for Windows 11 for ARM.

Please can you share a command to convert .ova or .vmdk  to.  vdhx