Unable to install CentOS 7 on VMWare fusion for Macbook M1

I am unable to install centos 7 on VMWare Fusion on my Macbook Air M1.
On the installation screen I am hitting `enter` on 'Install Centos 7` but nothing is happening and the screen is circling on the same page 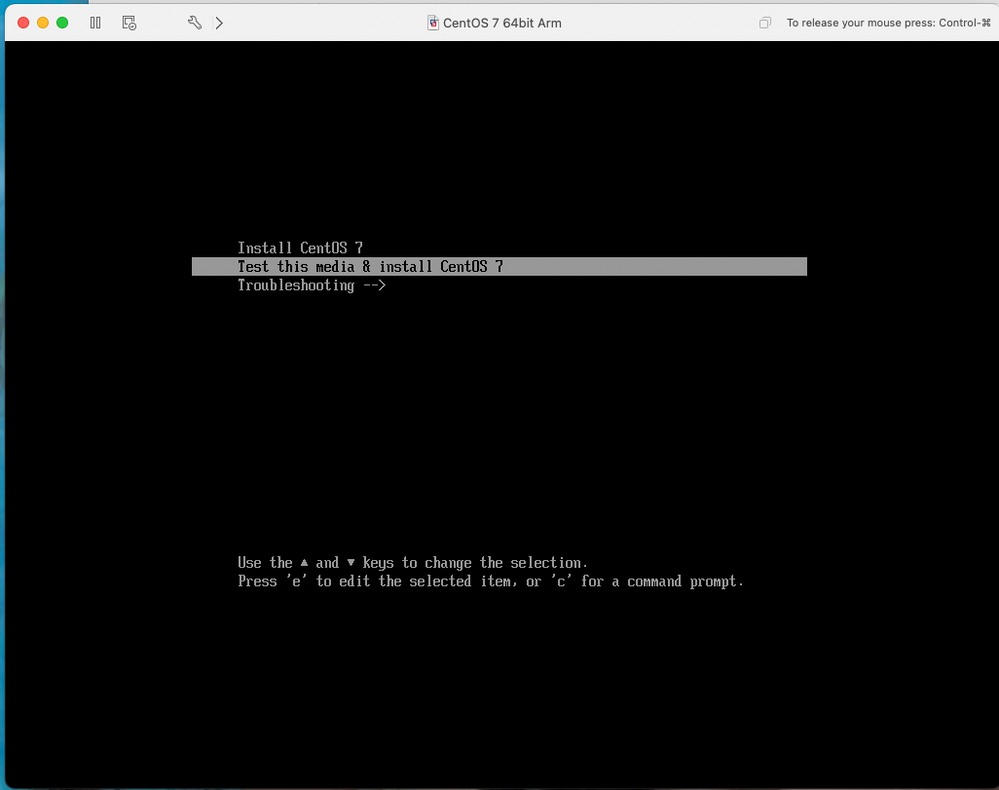 Circling on this screen

We make no claims about this OS in the testing guide.

CentOS 7 or 8 will not boot on the Tech Preview because their kernels are built with a 64KB page size that Apple Silicon hardware does not support. RHEL 7 and 8 suffer from the same issue.

RHEL 9 changed the page size on ARM architectures to 4KB. CentOS 9 Stream made the same change. They both will boot ( well they did before the recent round of kernel releases that cause pretty much all Linux distros to not boot on the TP - that’s another story altogether)

ah, so that why nothing works on fusion.

**bleep**.... Well, guess its time to look at other solutions for hypervisor.

If you can be patient, I'm keeping my fingers crossed that the next Fusion Tech Preview release (coming soon???) will make the kernel boot problems we're now seeing go away. Before these cropped up, the Tech Preview was working quite well for RHEL related releases such as Fedora, CentOS 9 Stream, and RHEL 9.  (as well as other distros).

You might want to check out the free UTM (which is a more user friendly front end to QEMU) to run the latest ARM Linux releases ( not CentOS/RHEL 7 or 8 )rather than paying for Parallels. UTM can run ARM Linux distros in virtualized mode, so it doesn't pay the penalty of trying to emulate a CPU. They've already fixed the issue that keeps newer Linux kernels from booting. It doesn't have all the features of Fusion, but It might tide you over until an updated Tech Preview. is released.

That won't fix the page size issue for older OS's though, right?  So CentOS 7 is unlike to work with any hypervisor?

@ColoradoMarmot is correct. CentOS 7 or 8, RHEL 7 or 8, and Rocky Linux 8 won't run on M1 hardware under anyone's hypervisor. Period. That's a function of Apple Silicon hardware that it doesn't support a 64KB page size, and virtualization isn't going to be able to work around that.

I think the M1 is going to be one of those major technical breaks that forces a lot of upgrading.  At some point we have to pay off the tech debt 🙂

The M1's performance and performance/watt of power is certainly challenging the perception that "real computers have Intel Inside or AMD..." . And that ARM is only good for phones and tablets.

This is so deja vu - I have been in the business long enough to see 2 paradigm shifts:

Its weird, i talked to parrallels support and some in RHEL they all say that it doesnt support mac m1 architecture.

By “it”, are you referring to CentOS 7/8? I can understand that both Parallels and Red Hat would say “not supported on M1” because of the page size issue. And because of the Apple “special sauce” no Linux release other than Asahi Linux will boot natively on M1s.

The Fusion Tech Preview seems to implement the aarch64 “System Ready” spec that does allow Linux to run in VMs. Both CentOS 9 Stream and RHEL 9 run nicely on what the TP provides (I’ve run both). Given both RHEL 9 and CentOS Stream 9 are downstream releases from Fedora 34, and Fedora 34 is one of the releases that VMware seems to be testing the TP on, its not surprising that they work.