How to install Ubuntu on Fusion Tech preview for M1 June 2022 #Easybutton..

When I got my new MAC for work I was surprised at how difficult it was to get an Ubuntu VM running and abandoned my first efforts and ended up making a QEMU vm with UTM as it was alot less friction to get it running.

The point of this post is to both document how I eventually got an Ubuntu VM working, but also to consolidate information spread across a bunch of posts into one place and make it easier for people to follow a step by step set of instructions and quickly get a VM running.

A few caveats to start with. This assumes you have Fusion Tech Preview installed, and have some idea how to use Linux cli etc.  I've only been successful so far with Ubuntu 20.04. (other versions may work, but this tutorial will focus on the 20.04 LTS ver of Ubuntu) We will be starting with the Server for ARM edition of the software as it was the easiest one to find thats an ARM edition of the software and has a kernel old enough to still work. Don't worry I'll show you how to build the Desktop environment your used to, its dirt simple 2-3 commands max. I got you bro 😄

I broke the process into 7 steps:
Prep Items & Downloads:
Download Tech Preview and Install on your MAC (my ver @ publish time = Professional Version e.x.p (19431034))
#I found it difficult to find a version of Ubuntu that would boot as I have a preference for the desktop ver so I've included a link to the file I used.
Download Ubuntu ISO: https://cdimage.ubuntu.com/releases/20.04/release/
ISO =ubuntu-20.04.4-live-server-arm64.iso
VM Build:
- Create a new vm select your 20.04 ISO-- select customize settings and enter the hostname you desire for your vm -- select save
- Modify system characteristics cpu/ram/disk etc -- I gave mine 4vCPU/8GB ram/68Gb NVMe disk
- Disable the network
#Boot and install from ISO (it will choke a few times trying to reach out to the internet, allow it to timeout and continue etc.)
#I accepted all defaults, and entered a username, hostname and pw etc. then rebooted
Prevent Kernel Updates:
#boot to login prompt (It may choke trying to reach the internet let it time out and continue booting)
#login with the user you created
#after login if you run hostnamectl you will see the kernel "Linux 5.4.0-100-generic"
#this will open another screen select NO and it will return you to your command prompt
#Hopefully it will not update the kernel again-- if anyone has additional input on anything I missed feel free to speak up
- Enable network for your VM
#verify your network came up as per the config you created during the OS install and you got an ip etc..
#your kernel ver should not have changed, after reboot and the system boots successfully etc.
#you can run hostnamectl again after reboot to verify you're still on the kernel ver you saw earlier.
Install Desktop Environment:
#another option is to run the following command instead -- sudo tasksel
#this would allow you to choose a desktop other than the standard ubuntu-desktop
# select the desktop environment you want to run - I chose Ubuntu Desktop this installs the normal Ubuntu Gnome Desktop that ships with the desktop distro - Same as the "sudo tasksel ubuntu-desktop command above etc.
#After reboot the box should boot into the desktop environment you've chosen. I did not get an error during the install but I've heard that some people have had issues. If it fails try to re-run the install, it should pick up where it left off.
Install Open VM Tools:
#if you enabled sharing the clipboard you should be able to cut and paste commands into your VM now..
Disable Wayland:
#uncomment the line that says "WaylandEnable=false" -- save the file
Upgrade to 5.14 kernel:
#login to your system again
#open the terminal
#I pulled these files from the following page: https://kernel.ubuntu.com/~kernel-ppa/mainline/v5.14/
#Had to do some guessing to get this just right, feel free to chime in if I missed anything here..
#Check your running Kernel ver
#you should see your new 5.14 kernel running after the reboot

Sorry about the goofy spacing in the article, this is about the best I can do with this automated markup editor... Again feel free to chime in if I missed something in the directions, or there is a better way to do something. I hope that this helps someone.  Happy Tuesday!

Thanks a lot for taking the time to write these instructions! It worked for me. This step:

didn't work for me, but entering "sudo tasksel" and selecting Ubuntu Desktop did.

Brilliant work, thanks so much for putting all of this together. Has anyone else struggled to get full screen resolution to work? In full screen, my resolution stays at a low 4:3 ratio. I confirmed that vmtools is working because I can copy across host to guest. Is there a step I've missed along the way?

Sorry, y'all. I hadn't done all of the reading yet. This is a known issue. This discussion covers it: https://communities.vmware.com/t5/Fusion-for-Apple-Silicon-Tech/Ubuntu-Desktop-20-04-3-LTS-resolutio...

Also can you post the result of running "hostnamectl" in cli to the thread?

The issue isn't that we don't support newer kernels, it's that there's a bug in Linux that hasn't been picked up by various distros yet.

You can verify that the fix it's not in Ubuntu kernels at all by comparing the patched fbmem.c and the one that Ubuntu is using.

https://git.launchpad.net/~ubuntu-kernel/ubuntu/+source/linux/+git/kinetic/tree/drivers/video/fbdev/...
Some other distos have figured this out... Kali is a great example. Kali Weekly uses 5.17, has our 2D drivers, newer Tools, and it works great. (Expect to see our 3D drivers soon... IIRC they have all been checked into Linus' Kernel tree.)

That said, we still have this bug in the Client (i.e. Fusion) where we don't handle the ID_AA64ISAR2_EL1 register properly. We're just working out when to ship it alongside our other deliverables. I'm seeing July as the current target, and I have a high degree of confidence that we'll meet that timeframe.

We couldn't backport that change to the existing version of the Tech Preview without porting a _TON_ of other stuff, and that creates way too much uncertainty to put on our customers. We didn't have plans to update that branch, which is why it's still out there. It's really a case of bad timing on multiple fronts, most of which were outside of our control.
So we have to go from a new branch, and that's a whole different (but future-safe) process.

(If this is all jargon, just know that we hear you, we're working on it, expect to see something this summer. Internally, it's been working real well...)
-
Michael Roy - PM/PMM: Fusion & Workstation

Thank you for this! Saved me a lot of time

@mhawkshaw -- My apologies I screwed up the command when I typed the article here. The correct command is:

Thank you for the feedback, I fixed the original post to reflect the correct command.

Thanks a million for creating this guide. I have followed it and was able to get the VM partially up and running.

My VM will not boot any longer after the steps to install the 5.14 Kernel. After installing the kernel with the "sudo dpkg -i *.deb" command and attempting the reboot the VM gets stuck. See screenshot below. I have a snapshot before the command so I can try again if anyone has any suggestions as to what's going on.

Please help, so close and yet so far... 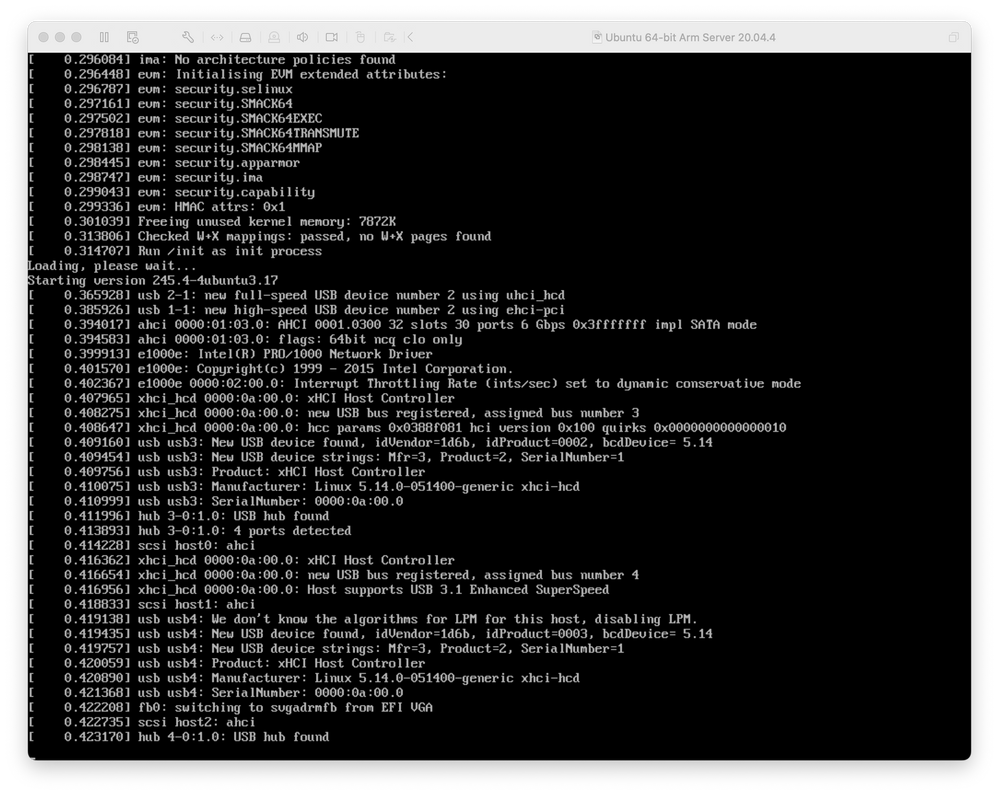 Your problem is the 5.14 kernel. Between Ubuntu failing to include Linux kernel patches and VMware making changes to this version of the Tech Preview 5.14 kernels don’t work. Revert your snapshot and install the mainline 5.19 kernel. That is known to work with the 22H2 Tech Preview . Canonical hasn’t managed to break that kernel (yet).

There’s a section in the document on obtaining Ubuntu mainline kernels. It recommends the use of the open-source “mainline” utility. It’s a lot easier to use than to download and install kernels  manually.

Thank you very much. I will try and follow your instructions hopefully this afternoon. I will post the results here.

Thanks for your help.

Thanks for sharing such a helpful instruction.

I now have a working VM running Ubuntu 20.04.4 with the 5.19 kernel. I'm able to adjust the resolution and everything looks good. So I decided to take the next step and upgrade to 22.04.4 using the instructions gratefully provided by Technogeezer in his guide.

In step #4 I start to run into problems. See the screenshot below of all the things I tried. Basically, there seem to be unresolvable updates and I don't know how to proceed.

Please try and help me get through this last bump.

Thank you very much. 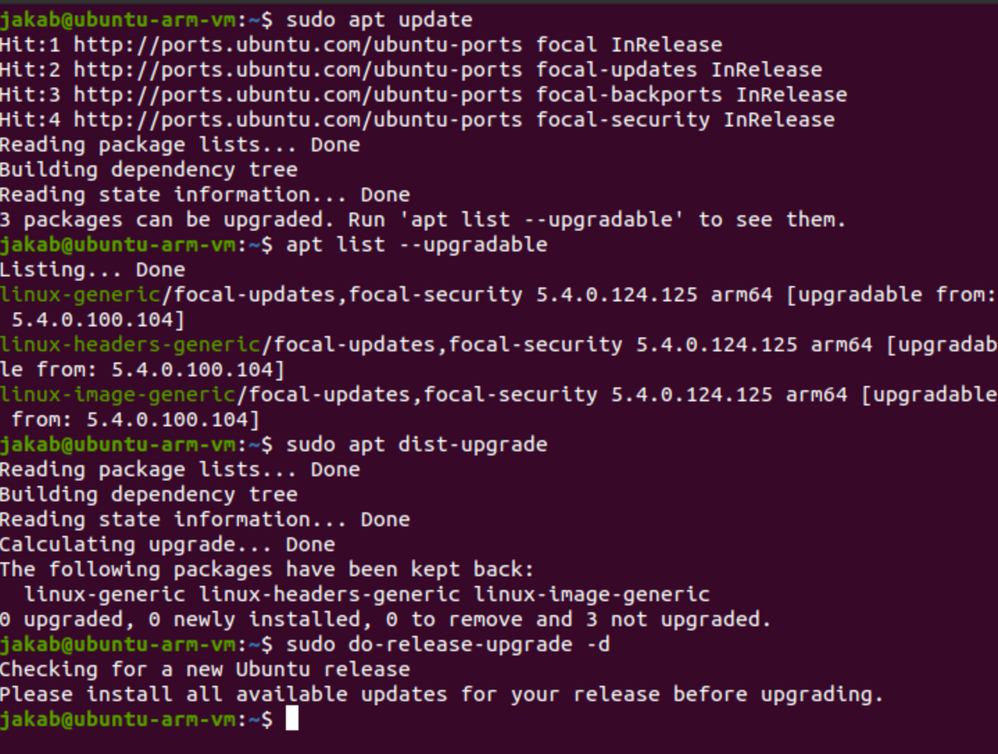 I’m assuming that you did not mark the kernel packages so that they would not update. It may be the case that the installed 5.19 mainline kernel is preventing the upgrade. If so,  I would proceed as follows:

Hi, thanks for the prompt reply.

I did mark the kernel to not update, but I did it when I first created the VM. Should I have done it again after installing the 5.19 kernel?

Also, if I remove the kernel with mainline, will the VM still work? Or does removing the 5.19 kernel install some other kernel?

I think that marking the kernel so that it doesn’t update is the source of your problem. You needed to do that with the 21H1 tech preview but from my experience it isn’t needed for the 22H2 Tech Preview with Ubuntu 20.04

I have an idea how to move you forward, but give me a bit so I can give you an exact series of steps that will get you there.

Ok, here's how I suggest you proceed:

This procedure is complicated by the fact that installing a 5.19 kernel directly under 20.04 LTS does not completely succeed since there are updated libraries that the one of the 5.19 kernel headers requires.

First. let's get Ubuntu so that it shows you the grub boot menu without you having to time the "esc" key at boot.

Sudo to root, and edit /etc/default/grub.

Change the line that says

to give you time to respond to the grub boot menu.

While still sudo'd to root, execute:

In the grub boot menu, select "Advanced options for Ubuntu", and boot the latest 5.4 kernel you find.

Once booted, sudo to root and use the mainline utility to remove the 5.19 kernel:

Remove the existing holds you have on the kernel and associated files.

Update and upgrade Ubuntu (note that 22.04.1 is now available, so the command to upgrade has changed)

(you no longer need the -d argument to do-release-upgrade)

At the end of the upgrade, do not reboot, instead answer the question with "N". Hit a return key when the screen appears to be sitting there, and answer to cancel the screen session. That should drop you back into the shell prompt.

Reboot and you should be good to go...

No problem, I can wait. Thanks for your help.

I just saw your last post with suggestions, OK, I will try it and let you know.

OK, basically your instructions worked, but I seemed to have run out of disk space during the process. See below. My VM has a 30GB disk defined.

I tried increasing the hard disk space on the VM that works, but it seems that the guest does not see the increased amount. Would you know how to fix that so that Ubuntu sees the whole amount of space defined for the VM?

The VM rebooted to 22.04 but had lots of errors reported, I think most related to having no space left. 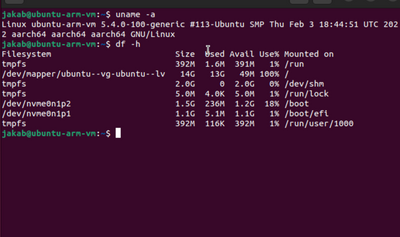