I have an issue that i'm not sure if this is normal or not.  We are running ESXi 7.0.1 U1d that we upgraded from 6.7 using the traditional ISO / baseline.

I am wanting to bring these up to 7.0.2 U2c using the new image based method.  When i start the process and select the image profile plus the Dell EMC addons, I get this message at the top :

When I save and have it validate the image against the HCL, it comes back with :

The following VIBs on the host are missing from the image and will be removed from the host during remediation: vmware-fdm(7.0.2-18356314).

This VIB seems to be the HA agent.  If it removes it during the remediation, will it re-install it again when the host exits maintenance mode ? How else will it be able to be a cluster member ? 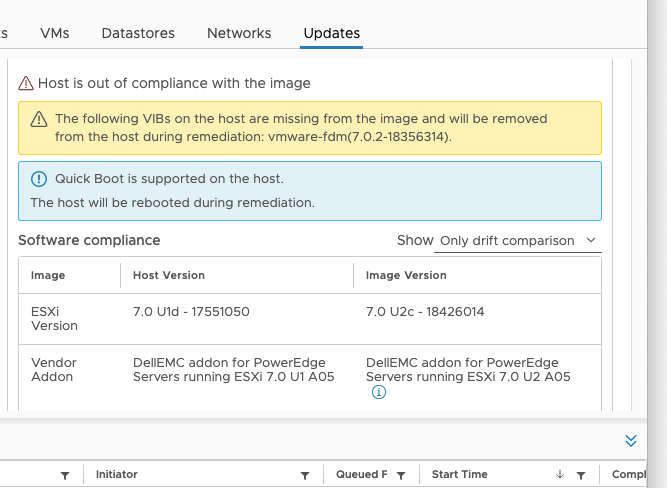 FDM Agent will be installed by vCenter, so I think that you should test and try it on one of hosts for sure, before upgrading whole cluster.

you may proceed with it

Have you tested it ? Did you notice any issue with fdm after updating the nodes ?

I second this - Has anyone tested their environment with the vmware-fdm(7.0.3-19192831) removed and is all working fine?

Has anyone tested their environment with the vmware-fdm(7.0.3-19192831) removed and is all working fine?

Now wanting to switch to the image based method, as baselines are marked as deprecated in 8.0+.

Our cluster has 17 hosts right now, DRS and HA is enabled. We cannot afford to lose HA availibility due to removed vsphere-fdm. 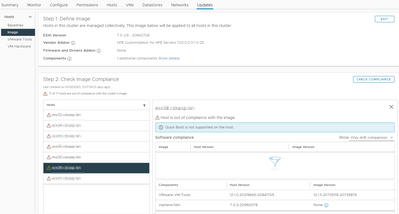 When I check the compliance, everything looks fine BUT the removal of 'vsphere-fdm' scares me, so right now I don't finish the process of setting up the image based process, as there is no way back to using baselines once the switch is made.

I read a lot of documentation from docs.vmware.com, I searched a lot of third party sites, but I didn't find an answer to this question.

After switching to image based updating, when the vsphere-fdm gets removed: will it get reinstalled once the host is updated with the newly created image? Another question: even IF it works this way, will the host still be "compliant" with the image after vsphere-fdm got re-installed? Or will it report a mismatch, because there would be an additional package installed which is not part of the manually defined image?

Some clarification would be nice. Thanks in advance!

No worries, it will work just fine. Done this dozens of times.

Thank you for the reassurance; I just switched to the image based solution and remediated the first few hosts one by one and as you said, everything works just fine.