when i try to deploy vm in new server give me blew Error:

A required disk image was missing.

any body can help me to solved this problem ?

What version of ESXi are you running? And what OVA is this?

There seems to be some reports for Cisco OVAs and GNS3 to have this issue.

i try deploy OVA and OVF but both of them show me this error.

this vm is Centos and it's not for Cisco and GNS3.

What file are you trying to do deploy?

sorry i can't share file because this file is  personality.

With release of vshere 6.5, there is no longer support to export to OVA.

You can either deploy OVA directly to the host

Check OVA or VMX files for hardware configuration and find out either your server is compatible with the required VM configuration.

Deploy an OVF or OVA Template

as soon as i read this it made sense. third export is the charm

first and foremost vmware you suck , that shit right now cost me a few hours.

The webui client sucks , it's annoying me and many other people at my company on daily basis.

Also forcing people to use it, is ridicolous. It isn't even feature complete.

Just a lesson on how to replace software:

2. Make sure it's FEATURE COMPLETE (! you missed that point)

3. Make sure it's not worse than the previous software (vsphere client is still way better and has less bugs)

4. Make sure it's working for your customers

Don't have special chars in the name of your vm or vmdk file. For me it was "[" and "]" which caused the import process to break.

But now comes the best part, this was working properly on another host, which still allowed me to use vsphere windows native client.
So it's obviously a regression in the webui client.

I can't guarantee it's the same issue for you but it was mine (other reason can be: cd iso file attached in the original vm which was used to create the .ova/ovf files)

I didn't bother to find out how this can be done for .ovas but i guess it's possible as well.

Now to the final point of my rant: "How come no one was able to reproduce this ?! Just put in a little more effort to help your cusomtomers. "

It is UI issue install this package to fix the UI http://download3.vmware.com/software/vmw-tools/esxui/esxui-signed-12086396.vib

Yo MAn was having the same problem , and this was exactly what fixed it ! cheers!

Is this a normal response? I don't want to brick the server and have to start over?
My background is very very very small with servers I'm self learning and have no formal training. just hands on messing around to get where I have gotten so far.
0 Kudos
Share
Reply

And this is the issue I'm having with loading a OVF file. 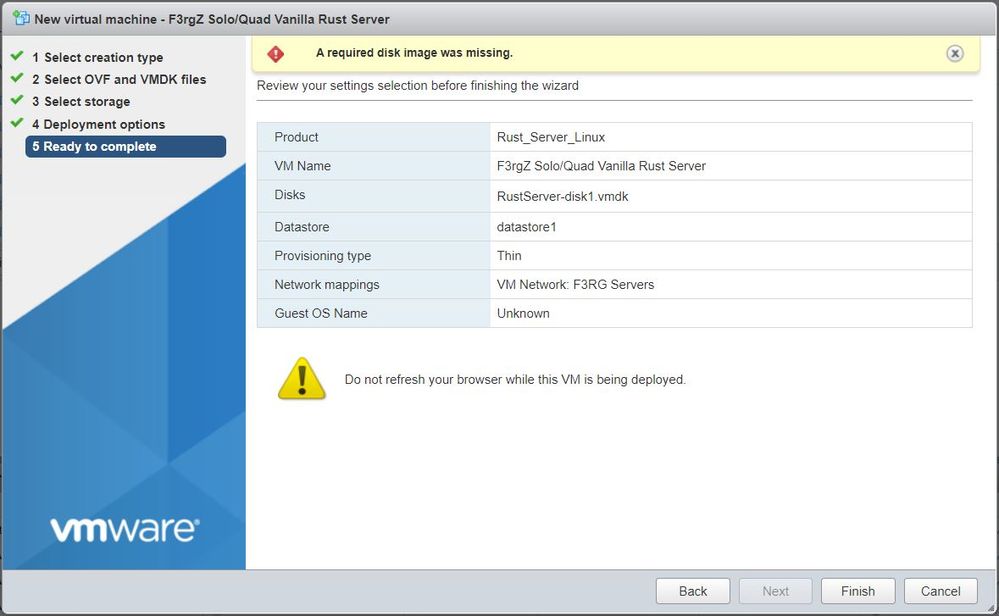