I have configured Autodeploy in my environment. I have tested UEFI booting clients by booting using nested ESXi hosts which boot cleanly while configured with UEFI bios. I now am attempting to get a physical host booting which is not working. I seem to recall something about keys or certificates which must be loaded on the physical server before it will boot from the network using UEFI ?

Any additional troubleshooting steps anyone would recommend?

I'm still having no luck with this, does anyone have any basic troubleshooting steps I can perform for when Autodeploy using UEFI network boot is failing?

However it doesn't proceed past this and eventually will boot into Windows. Using DHCP test I can see that all my options are correct, and that an IP is being offered by the DHCP server:

My nested ESXi hosts are also booting without an issue, just this physical host. What I'm looking for is basic troublehsooting steps for when UEFI network boot is failing.

Any input helps!
Thanks.

I have nested ESXi hosts booting 6.5 via UEFI network boot without issues, however I am still unable to boot a physical host. It gets to the screen pictured below then the screen goes black and either it stops or I just can't see what's going on, but in either case, at no point does it load ESXi. It responds to ping but no other ports. I have noticed a few differences, namely 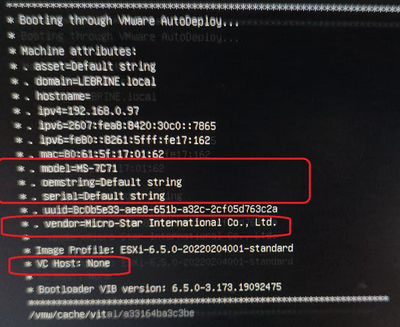 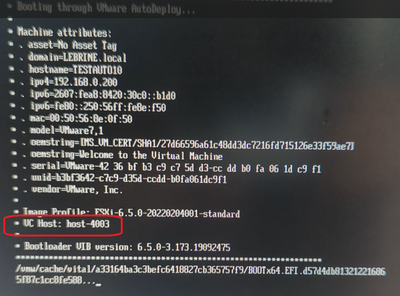 Could someone tell me the exact step in the boot process that happens the moment the above screens are seen? The working host begins to boot ESXI, the non-working physical host just goes black. I'm at a loss as to what to troubleshoot next.

After swapping in a legacy video card, I was able to get further into boot process. I believe that the boot process has been failing at the point pictured.  Clearly this issue is related to this message:

UEFI Secure Boot is not enabled
Shutting down firmware services

I'm not giving up until this is fixed! 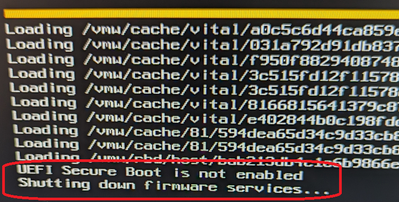