I can not seem to get Apps on-demand to work.

I do not understand how the Apps-on-Demand feature works. If the appstack is only attached on-demand, where does the shortcut a user should click on to launch an application (which is installed in an appstack and is not yet attached) comes from and where does it point to?

Please check if this helps

I saw this video already but it does not explain anything technical.

Is anybody using this functionality?

Not yet, but I'm in progress of testing, we stick with the LTS version so I'm still on 7.13 since 2111 just came out and is the next LTS version I think.

When you create new package On-demand option will be available to you: 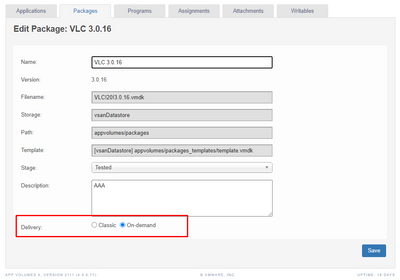 The option "On-Demand" is indeed there. However it does not work for me as intended.

In the video of Chris Halstead (https://techzone.vmware.com/?share=video4301&title=whats-new-in-horizon-8-2111 (as of 29min26sec until 30min52sec), Chris mentions that the appstack is attached after the user clicks on a shortcut for the on-demand application.

Also the video of Ron Oglesby (https://blogs.vmware.com/euc/2021/11/apps-on-demand-rons-cool-feature-of-the-week.html ) does not give me more information. What is explained in the video by Jeff Ulatoski (Product Management Team EUC Group responsibek for App Volumes) is that at logon App Volumes will deliver the shortcuts, startmenu items, search, file associations, ... Only when a user click on a shortcut the appstack is attached to the machine and the application will be delivered (installed)

Firstly: I want to understand how the Apps-on-Demand feature works. If the appstack is only attached on-demand, where does the shortcut a user should click on to launch an application (which is installed in an appstack and is not yet attached) comes from and where does it point to?

Secondly: I can not get the functionality to work as expected.

I haven't fully tested On-demand feature yet but I've noticed that VLC desktop shortcut has not been delivered until package has been attached. I found VLC shortcut in Start Menu, this allowed me to attach On-demand package.

I will do some more testing and will post my findings here.

I'm still hoping somebody will respond on my request on twitter

The Apps-on demand feature of App Volumes should in theory only attach the VMDK/VHD file "On-Demand" and not at logon as is with "classic" appstacks.

First, we are not going to give away our secret sauce, but I can tell you that it takes and applies them to the start menu to allow on-demand launch.

It's like MSI installs with user configurations. You can install the app and self-heal the users config the first time you launch the application.

The only way I see on-demand not working, is if your remove the shortcut from the AppVol package to let DEM create your short cuts and manage their placements. 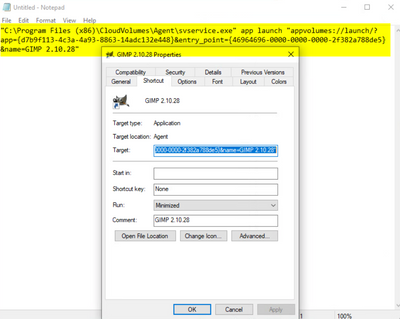 AS you can see the shortcut target is changed to our on-demand path.

does this feature work with VDH and VMDK?

when packaging does anything need to be set? or is the on-demand flag only on the Manager? we package via appcapture.exe

Hi @Lieven -- Realize this response is a little late as I just saw it for the first time.  Happy to have a session with you for Apps On Demand if you can message me.  If others also have interest, please let me know and we can do a larger session.

Thank you for your response. It would be great to have a session regarding Apps on Demand.

I am especially interested in how Apps on Demand publishes desktop shortcuts, handles file type associations, ...

Yes, would love to see a session of that new feature as well.

Sorry to tag team an old post, but I am trying to convert some classic appvolumes to on-demand and not having luck.  Is it supported to go in and edit the application later to on-demand?  I tried that with one we packaged normally, but when I change it to on-demand, the icon disappears from the start bar and desktop for the users it is assigned to.  Is there a way get a normal AppVol converted to on-demand or do I have to re-package it?

For those that replied about a session, I'm looking into arranging a session and will get back to you.

@electricd7 - Regarding the issue of not being able to update an existing package which should work for you, can you please submit a support request so our support team can work through it with you?

Will do.  I am also interested in the session.

This is exactly what I found in testing. Unfortunately, we have DEM rules that apply shortcuts to the users' desktops (depending on AD security group membership) with the runOnceSpecial parameter. Reason for that is that our users throw a fit when they can't customize their desktop shortcuts to their liking. When creating the AppVol package, I manually removed the desktop icon but made sure to copy the path and the arguments in the shortcut as you have shown above. I then created a new DEM shortcut rule for the desired application with those parameters. When logging in, DEM applies the shortcut, and the on-demand app launches fine with no issues. The problem is presented when users close the application and attempt to use the same desktop shortcut to launch the application again:

It seems that once the volume is attached, the agent cannot run the specified shortcut parameters again. However, launching from the start menu still works fine. Not necessarily a deal-breaker, but it does unfortunately cause the end user to lose some control over their desktop shortcuts since the on-demand apps will always require the shortcut to be provisioned by the AppVolumes package rather than a separate DEM configuration.

Still really enjoying apps on-demand. There are plenty of use cases for it in our environment, but it would be nice to see some flexibility for those of us who want to dynamically assign shortcuts in a future update. In my ideal environment, I would just force the same shortcuts for every user at every login, making this a non issue. But unfortunately, as stated before, our end users “require” the ability to modify the shortcuts.