I've been spinning my wheels for a while on this and have read around quite a bit to get an idea of other people's experience with it. I figured for the sake of it, I would post in communities. Our company has a paid volume license of Adobe Acrobat 2017 Pro DC that we originally used with AppVolumes 4 on a Windows 10 1809 floating pool. The serialize deployment article is what we originally used to accomplish this and everything worked as expected:

Roughly a year later, I am working on getting users moved over to a 1909 floating pool. When doing so, the users entitled to the Adobe AppVolume started calling regarding an error every time they would launch it: 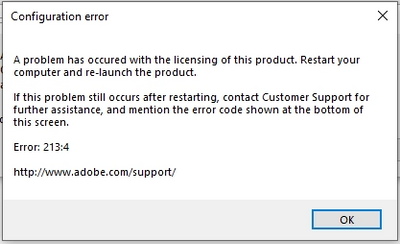 I thought I would re-create the Appvolume on a new 1909 VM for good measure using the same process documented in the Adobe article. However, the result was still the same. Same error each time a user tries to launch Adobe.

From what I have read, it seems that some serial deployments are being phased out, and it seems that with older versions of Adobe that use volume licensing are starting to run into this problem. Can anyone confirm this? If so, I assume that this is more of a push towards named licensing on Adobe's end.

Any help is appreciated!

My configuration to get capture Adobe DC. Haven't failed me yet regardless of the Windows version started with 1803 now I am on 20H2. Hope it helps.

Thanks for the response.

This issue ended up resolving itself in the end. We actually switched to named licensing for all Adobe products in our organization. We had so many different versions out there that management agreed it was time to make the switch. As for this, I will test it out, as I don't think I have the HKLM keys you listed below set the way you do.