How much flash (or DRAM) based Solid State Device (SSD) do you want or need?

Unlike most of the current generation of SSD vendors besides those actually making the dies (chips or semiconductors) or SSD drives that are startups or relatively new, TMS is the industry veteran. Where most of the current SSD vendors experiences (as companies) is measured in months or at best years, TMS has seen several generations and SSD adoption cycles during its multi-decade existence.

What this means is that TMS has been around during past dynamic random access memory (DRAM) based SSD cycles or eras, as well as being an early adopter and player in the current nand flash SSD era or cycle.

Granted, some in the industry do not consider the previous DRAM based generation of products as being SSD, and vice versa, some DRAM era SSD aficionados do not consider nand flash as being real SSD. Needless to say that there are many faces or facets to SSD ranging in media (DRAM, and nand flash among others) along with packaging for different use cases and functionality.

IBM along with some other vendors recognize that the best type of IO is the one that you do not have to do. However reality is that some type of Input Output (IO) operations need to be done with computer systems. Hence the second best type of IO is the one that can be done with the least impact to applications in a cost-effective way to meet specific service level objectives (SLO) requirements. This includes leveraging main memory or DRAM as cache or buffers along with server-based PCIe SSD flash cards as cache or target devices, along with internal SSD drives, as well as external SSD drives and SSD drives and flash cards in traditional storage systems or appliances as well as purpose-built SSD storage systems.

While TMS does not build the real nand flash single level cell (SLC) or multi-level cell (MLC) SSD drives (like those built by Intel, Micron, Samsung, SANdisk, Seagate, STEC and Western Digital (WD) among others), TMS does incorporate nand flash chips or components that are also used by others who also make nand flash PCIe cards and storage systems.

IMHO this is a good move for both TMS and IBM, both of whom have been StorageIO clients in the past (here, here and here) that was a disclosure btw   as it gives TMS, their partners and customers a clear path and large organization able to invest in the technologies and solutions on a go forward basis. In other words, TMS who had looked to be bought gets certainty about their future as do they clients.

IBM who has used SSD based components such as PCIe flash SSD cards and SSD based drives from various suppliers gets a PCIe SSD card of their own, along with purpose-built mature SSD storage systems that have lineages to both DRAM and nand flash-based experiences. Thus IBM controls some of their own SSD intellectual property (e.g. IP) for PCIe cards that can go in theory into their servers, as well as storage systems and appliances that use  Intel based (e.g. xSeries from IBM) and IBM Power processor based servers as a platform such. For example DS8000 (Power processor), and Intel based XIV, SONAS, V7000, SVC, ProtecTier and Pursystems (some are Power based).

In addition IBM also gets a field proven purpose-built all SSD storage system to compete with those from startups (Kaminario, Purestorage, Solidfire, Violin and Whiptail among others), as well as those being announced from competitors such as EMC (e.g. project X and project thunder) in addition to SSD drives that can go into servers and storage systems.

The question should not be if SSD is in your future, rather where will you be using it, in the server or a storage system, as a cache or a target, as a PCIe target or cache card or as a drive or as a storage system. This also means the question of how much SSD do you need along with what type (flash or DRAM), for what applications and how configured among other topics. 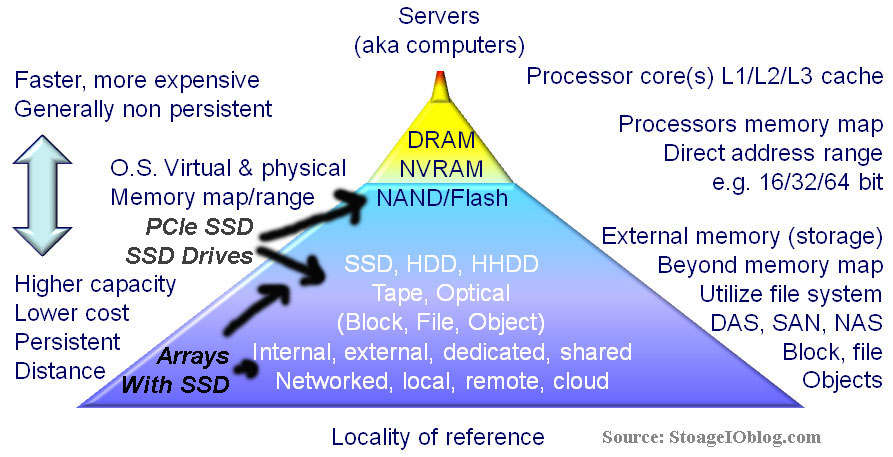 What this means is that there are many locations and places where SSD fits, one type of product or model does not fit or meet all requirements and thus IBM with their acquisition of TMS, along with presumed partnership with other SSD based components will be able to offer a diverse SSD portfolio.

The industry trend is for vendors such as Cisco, Dell, EMC, IBM, HP, NetApp, Oracle and others all of whom are either physical server and storage vendors, or in the case of EMC, virtual servers partnered with Cisco (vBlock and VCE) and Lenovo for physical servers. 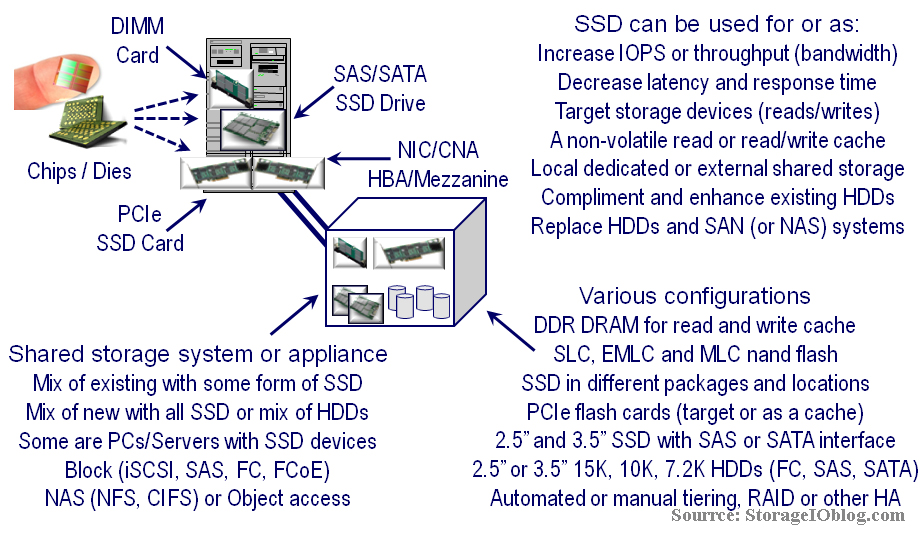 Thus it only makes sense for those vendors to offer diverse SSD product and solution offerings to meet different customer and application needs vs. having a single solution that users adapt to. In other words, if all you have is a hammer, everything needs to look like a nail, however if you have a tool box of various technologies, then it comes down to being able to leverage including articulating what to use when, where, why and how for different situations.

I think this is a good move for both IBM and TMS. Now lets watch how IBM and TMS can go beyond the press release, slide decks and webex briefings covering why it is a good move to justify their acquisition and plans, moving forward and to see the results of what is actually accomplished near and long-term.

Read added industry trends and perspective commentary about IBM buying TMS here and here, as well as check out these related posts and content:

How much SSD do you need vs. want?
What is the best kind of IO? The one you do not have to do

SSD and Green IT moving beyond green washing

Meanwhile, congratulations to both IBM and TMS, ok, nuff said (for now).