Seagate  recently announced the next generation Momentus XT Hybrid Hard Disk Drive  (HHDD) with a capacity of 750GB in a 2.5 inch form factor and MSRP of $245.00  USD including integrated NAND flash solid state device (SSD). As a refresher,  the Momentus XT is a HHDD in that it includes a 4GB nand flash SSD integrated  with a 500GB (or larger) 7,200 RPM hard disk drive (HDD) in a single 2.5 inch  package.

This is the  fifth installment of a series that I have done since June 2010 when I  received my first HHDD a Seagate Momentus XT. You can read the other  installments of my momentus moments here, here, here and here.

Whats is new with the new  generation.
Besides  extra storage space capacity up to 750GB (was 500GB), there is twice as  much single level cell (SLC) nand flash memory (8GB vs. 4GB in previous  generation) along with an enhanced interface using 6Gb per second SATA that  supports native command queuing (NCQ) for better performance. Note that NCQ was  available on the previous generation Momentus XT that used a 3Gb SATA interface.  Other enhancements include a larger block or sector size of 4096 bytes vs.  traditional 512 bytes on previous generation storage devices.

This bigger  sector size results in less overhead with managing data blocks on large  capacity storage devices. Also new are caching enhancements are FAST Factor  Flash Management, FAST Factor Boot and Adaptive Memory Technology. Not to be  confused with EMC Fully Automated Storage Tiering the other FAST; Seagate FAST  is technology that exists inside the storage drive itself. FAST Factor boot  enables systems to boot and be productive with speeds similar to SSD or several  times faster than traditional HDDs.

The FAST  Factor Flash Management provides the integrated intelligence to maximize use of  the nand flash or SSD capabilities along with spinning HDD to boot performance,  keep up compatibility with different systems and their operating systems. In  addition to performance and interoperability, data integrity and SSD flash  endurance are also enhanced for investment protection. The Adaptive Memory  technology is a self learning algorithm to give SSD like performance for  often used applications and data to close the storage capacity too  performance gap that has increased along with data center bottlenecks.

Some questions and discussion  comments:

When to use SSD vs. HDD vs.  HHDD?
If you need  the full speed of SSD to boost performance across all data access and cost is  not an issue for available capacity that is where you should be focused.  However if you are looking for lowest total cost of storage capacity with no  need for performance, than lower cost high capacity HDDs should be on your  shopping list. On the other hand, if you want a mix of performance and capacity  at an effective price, than HHDDs should be considered.

Why the price jump compared to  first generation HHDD?
IMHO, it  has a lot to do with current market conditions, supply and demand.

With recent  floods in Thailand and forecasted HDD and other technology shortages, the lay  of supply and demand applies. This means that the supply may be constrained for  some products causing demand to rise for others. Your particular vendor or  supplier may have inventory however will be less likely to heavily discount  while there are shortages or market opportunities to keep prices high. There  are already examples of this if you check around on various sites to compare  prices now vs. a few months ago. Granted it is the holiday shopping season for  both people as well as organizations spending the last of their available  budgets so more demand for available supplies.

What kind of performance or productivity  have I seen with HHDDs?
While I  have not yet tested and compared the second generation or new devices, I can  attest to the performance improvements resulting in better productivity over  the past year using Seagate Momentus XT HHDDs compared to traditional HDDs.  Here is a post that you can follow to see some boot performance comparisons as  part of some virtual desktop infrastructure (VDI) sizing testing I did earlier  this year that included both HHDD and HDD.

When will I jump on the SSD  bandwagon?
Great  question, I already have and have been using SSD. I have actually been on the SSD train for several decades using them,  selling them, covering, analyzing and consulting around them along with other  storage mediums including HDD, HHDD, cloud and tape. I have some SSDs and will  eventually put them into my laptops, workstations and servers as primary  storage when the opportunity makes sense. However instead of waiting and wishing for that larger capacity, lower cost SSD, Im gaining benefits today by leveraging the HHDDs.

Will HHDDs help backup and  other data protection tasks?
Yes, in  fact I initially used my Momentus XTs as backup or data protection targets  along with for moving large amounts of data between systems faster than what my  network could support.

Why not use a SSD?
If you need the performance and can afford the price, go SSD!

On the  other hand, if you are looking to add a small 64GB, 128GB or even 256GB SSD  while retaining a larger capacity, slower and lower cost HDD, an HHDD should be  considered as an option. By using an HHDD instead of both a SSD and HDD, you  will cut the need of figuring out how to install both in space  constrained laptops, desktop or workstations. In addition, you will cut  the need to either manually move data between the different devices or avoid having  to acquire software or drivers to do that for you.

How much does the new Seagate  Momentus XT HHDD cost?
Manufactures Suggested Retail Price (MSRP) is listed at $245 for a  750GB version.

Does the Momentus XT HHDD need  any special drivers, adapters or software?
No, they  are plug and play. There is no need for caching or performance acceleration  drivers, utilities or other software. Likewise no needs for tiering or data  movement tools.

How do you install an HHDD  into an existing system?
Similar to  installing a new HDD to replace an existing one if you are familiar with that  process. If not, it goes like this (or uses your own preferred approach). 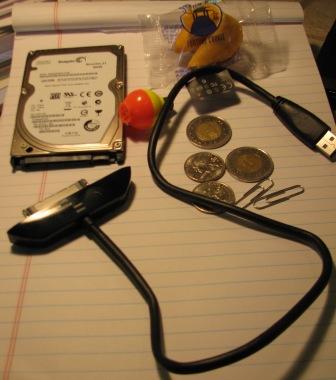 Can an HHDD fit into an  existing slot in a laptop, workstation or server?
Yes. In fact,  unlike a HDD and SSD combination, that requires multiple slots or forcing one  device to be external, HHDDs like the Momentus XT simply use the space where  your current HDD is installed.

How do you move data to it?
Beyond the  first installation described above, the HHDD appears as just another local  device meaning you can move data to or from it like any other HDD, SSD or CD.

Do you need automated tiering  software?
No, not  unless you need it for some other reason or if you want to use an HHDD as the  lower cost, larger capacity option as a companion to a smaller SSD.

Do I have any of the new or  second generation HHDDs?
Yes, one arrived the other day after they were offically released, stay tuned for some follow up information in a future momentus moment.

Bottom  line (for now), If  you are considering a large capacity, HDDs check out the HHDDs for an added  performance boost including faster boot times as well as accessing other  data quicker.

On  the other hand if you want an SSD however your budget restricts you to a  smaller capacity version, look into how an HHDD can be a viable option for some  of your needs.

This content has been marked as final.  Show 2 comments
By date: By tag: